The Special Supplemental Nutrition Program for Women, Infants, and Children (WIC) is funded and administered by the Food and Nutrition Service of the United States Department of Agriculture in partnership with states and local agencies. Its purpose is to serve as an adjunct to good health care during critical times of growth and development in order to prevent the occurrence of health problems. It serves pregnant and breastfeeding women, as well as children up to five years of age. Eligibility criteria include poverty and an identified medical or nutritional risk. Program benefits include nutritious foods, nutrition education, and referrals to maternal and child health services.

As an amendment to the Child Nutrition Action of 1972, Congress created the Special Supplemental Food Program for Women, Infants, and Children

Food Stamp Participation, 1970-1995
The WIC program provides aid recipients with checks, much like food stamps, that can be exchanged for certain foods. The foods allowed include cereal, juice, and other nutritious items essential to growing children's health. 45 percent of babies born in the United States get food aid from WIC.

(WIC) as a pilot project. Support came from evidence of the importance of maternal nutrition for positive pregnancy outcomes, and of the potential for permanent physical damage to malnourished infants and small children. To further define the intent of the program, nutrition education became a mandated part of the program in 1975. By 1975 the WIC program served approximately 500,000 participants in forty-eight states, Puerto Rico, the Virgin Islands, and two Tribal Organizations. WIC's name was changed under the Healthy Meals for Healthy Americans Act of 1994. Now known as the Special Supplemental Nutrition Program for Women, Infants, and Children, the program serves more than 7 million women and children and covers every state, the District of Columbia, Puerto Rico, the Virgin Islands, American Samoa, Guam, and thirty-three Tribal Indian Organizations, as well as eligible Department of Defense personnel overseas.

How the Program Works

The mission of the WIC program is to safeguard the health of low-income women, infants, and preschool children who are at nutritional risk by providing at no cost: (1) healthful foods to supplement diets, (2) information on healthful eating, and (3) referrals to health care. Income guidelines include those families whose gross income falls at or below 185 percent of the U.S. Poverty Income Guidelines. These guidelines change annually, so that for 2002-2003 a family of two could earn up to $22,089 annually, or $425.00 weekly. Nutritional risk is classified into two major categories: (1) medically based risks, such as anemia, underweight or overweight, and insufficient growth; and (2) diet-based risks, such as inadequate dietary patterns.

WIC currently serves 45 percent of all babies born in the United States. As the name of the program implies, babies up to twelve months of age are considered infants. They are eligible to receive iron-fortified infant formula, infant juice, and dry infant cereals. Children up to five years of age receive iron-fortified cereal, fruit and vegetable juices that are a good source of vitamin C, eggs, milk, cheese, peanut butter, and dried beans and peas. Pregnant women receive larger packages of the same foods that children receive. Following pregnancy, mothers who exclusively breastfeed their babies may receive more foods, including raw carrots and canned tuna, and they are eligible up to one year after the birth of their baby. Those women who do not breastfeed may be eligible up to six months after the birth of their baby. The WIC foods may be obtained at grocery stores. Further, participants can obtain fresh, locally grown fruits, vegetables, and herbs at WIC-authorized Farmers' Markets during the summer and fall harvest months in 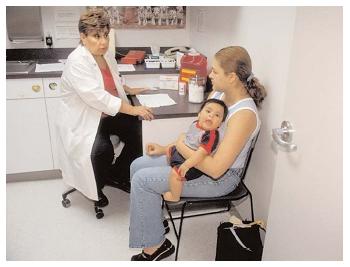 A new mother receives counseling at a WIC clinic. Other services available at the clinics include dental care, immunizations and various health screenings.
some locations. WIC foods supply nutrients that are generally considered lacking in the diets of low-income populations, such as protein, calcium, iron, and vitamins A and C.

Mandatory provision of nutrition education sets the WIC program apart from other federally funded food programs. The focus of the education is to address participants' specific nutrition needs and to positively affect nutrition and health habits. Education for pregnant women focuses on making food choices that will allow optimal weight gain for good fetal growth. Funding for promotion and support of breastfeeding became a requirement of the program starting in 1989. Parents and caregivers are educated on healthy feeding relationships and the importance of offering age-appropriate, healthful foods to foster proper growth and development. In addition to food and nutrition education, the WIC program encourages the use of prenatal and other medical and social services. Referrals are frequently made to physicians and to other social assistance and health programs, including dental care, alcohol and drug assistance, child care, and housing.

The WIC program has been deemed a success because it has achieved its initial goals, and because other beneficial outcomes have been identified. The initial goals of increasing length of pregnancies, decreasing early births and low birth weights, increasing use of prenatal care and decreasing the incidence of iron-deficiency anemia in infants and children have all been achieved. This is partially due to a higher intake of ten nutrients, including the targeted nutrients iron and vitamin C. Increased rates of breastfeeding, as well as improved growth rates, have also been attributed to the WIC program. WIC program enrollment has also significantly improved the nutritional status of pregnant women. Unexpected benefits include a savings in health care costs from $1.77 to $3.13 for each dollar spent on WIC. Further, in terms of school achievement, WIC children have improved vocabulary scores and memory of numbers.

Due to the success of the program, other issues that affect this population have been added to the services of WIC clinic visits. Participant screening now includes issues such as dental care; lead screening; physical, sexual, or verbal abuse; alcohol, drug, and tobacco use; voter registration; immunizations; and family reading practices. This "melting pot" of health and education initiatives has placed the WIC program in a position of being an important partner in promoting the health and nutritional status of mothers and children.