The Dutch physician Nicolaas Tulp was born on October 11, 1593, in Amsterdam, Holland, the fourth child of a prominent merchant family. He was originally named Claes (Nicolas) Pieterz, but he later adopted the name Tulp, meaning "tulip." Tulp attended Leiden University in Holland, receiving his medical degree in 1614. He then returned to Amsterdam, opening a practice in surgery and general medicine. In 1628, Tulp was appointed as a lecturer of the Surgeon's Guild, a position he held until 1652. His duties were to lecture in anatomy and surgery, to apprentice surgeons, and to 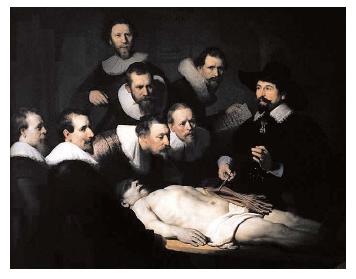 Rembrandt's "The Anatomy Lecture of Dr. Nicolaes Tulp." Dr. Tulp was a lecturer for the Amsterdam Surgeon's Guild, and among his duties was the presentation of public dissections.
deliver public dissections. The most famous of these, held on January 31, 1632, was depicted by the artist Rembrandt in his famous painting "The Anatomy Lesson of Dr. Tulp," now in Holland's Mauritshuis museum.

Tulp's best-known medical work, published in Latin in 1641, is titled Observationes Medicae. Tulp believed that all medical publications should be published in Latin, which the public could not read, to prevent people from treating their own illnesses. In his book, Tulp summarized his own cases and observations, including his description of beriberi, a disease caused by vitamin B1 (thiamine) deficiency. This is one of the first known descriptions of beriberi. Tulp had treated a Dutchman who was brought back to Holland from the East Indies, suffering from what the natives of the Indies called beriberi or "the lameness." Although Tulp described beriberi in detail, he was unaware that it was caused by a dietary deficiency. It was more than two hundred years later that Dutch physicians discovered the cause of beriberi. Tulp also described the ileocecal valve at the junction of the large and small intestines, still known as Tulp's valve.

During the plague epidemic of 1635, Tulp supported quarantine as a means to control the spread of the disease. At the same time, Tulp suggested that local pharmacists be placed under municipal control, because he viewed them as inefficient. This resulted in the formation of the first local medical authority in Holland. Another result of Tulp's concern was the publication of the first Dutch pharmacopoeia, a book describing drugs, chemicals, and medicinal preparations.

In addition to his scientific endeavors, Tulp was an active public servant. He served four times as mayor of Amsterdam, was treasurer of the city for twenty-seven years, and was elected several times as a city councilor. Tulp also served as a judge, trustee of the city orphanage, and curator of two local schools. Tulp was married to Aagfe Van der Vogh in 1617; unfortunately, she died in 1628. Tulp died in the The Hague in 1674, at the age of eightyone.

Todhunter, E. Neige (1967). "Biographical Notes from the History of Nutrition." Journal of the American Dietetic Association 50:200.