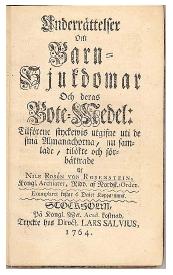 The title page to Nils Rosén von Rosenstein's The Diseases of Children and Their Remedies. The book includes advice for feeding infants, preventing disease in children, and curing some common illnesses. Its publication established Rosenstein as a pioneer in pediatrics.

Nils Rosén von Rosenstein (1706–1773) was a Swedish physician, born in the city of Gothland. He is considered a founder of modern pediatrics, primarily because of a systematic treatise he wrote on the treatment of children and infants. This work, entitled The Diseases of Children and Their Remedies, was the first modern pediatric textbook, and it encouraged progress in the area of child health.

Rosenstein's writings were first disseminated as parts of calendars issued by the Swedish Royal Academy of Sciences, the oldest learned society in Sweden. In 1764, the academy compiled all the parts and put them in book form. According to Nigel Philips, a contemporary of Rosenstein, his book was considered "the most progressive which had yet to be written." The book contained chapters on such topics as smallpox and smallpox inoculation, teething, and measles. Also included were suggestions on the frequency of breastfeeding and information on how breastfeeding affects an infant's health. The Diseases of Children and Their Remedies was written so intelligibly and with such universal appeal that the average person of the time could read it.

Rosenstein was particularly interested in infant feeding. He was ahead of his time when he recommended feeding young children with diluted cow's milk by means of a bottle for sucking. He also advised that children's foods be covered to avoid contact with insects, along with other hygienic precautions. Rosenstein had an extensive medical practice that allowed him to make frequent practical observations. He laid the foundation of pediatrics as a specialty, and he gave direction to future pediatrics. Using his own notes he was also able to accurately describe and prescribe care for scarlet fever, whooping cough, diarrhea, and other illnesses. In his day, he was the most eminent physician in Sweden. He became a world famous professor of practical medicine at Uppsala University, and he was knighted by Queen Lovisa of Sweden. By the time the last Swedish edition of Rosenstein's book was published, in 1851, there existed at least twenty-five editions published in eight different languages.

Knipe, K. (2001). "Paediatrics: The Individuals and External Influences Involved in Forming this Special Branch of Medicine, from Hippocrates to the Present Day." Proceedings of the Royal College of Physicians Edinburgh 31:339–341.

Rosenstein, Nils Rosén von (1776). The Diseases of Children and Their Remedies. Available from <http://www.collphyphil.org> and <www.mc.vanderbilt.edu/biolib/hc/nh6.html>