John Stith Pemberton was born in Knoxville, Georgia, and spent his childhood in Rome, Georgia. He graduated from Southern Botanico Medical College of Georgia in 1850. Pemberton briefly practiced as a traditional Thomsonian "steam doctor," modeled after Samuel Thomson's Complete System of Practice as outlined in his book New Guide to Health. Steam doctors used steam baths, herbs, and other products to induce sweating, which they believed would restore the body to proper health. Pemberton later obtained a degree in pharmacy from a school in Philadelphia. In 1855, Pemberton moved to Columbus, Georgia, with his wife, Anna Eliza Clifford Lewis, and their only son, Charles Ney Pemberton. Here, he practiced primarily as a druggist for fourteen years, though he also performed other medical procedures. Pemberton was a member of the first licensing agency for pharmacists in Georgia.

In May 1862, Pemberton enlisted as a first lieutenant in the Confederate Army, and he organized Pemberton's Calvary to guard the town. In Pemberton's last battle he was shot and cut with a saber across the chest. He used morphine for his pain, and eventually became a morphine addict.

For five years after the war, Pemberton worked as a partner with Dr. Austin Walker, a local and wealthy physician. During this time, Pemberton invested all of his money in researching and developing a line of proprietary items, which included perfumes and botanical medicines. During this time, there was a large demand for home remedies and tonics in the United States, especially in large cities. In 1869, Pemberton moved to Atlanta, Georgia, to start a lucrative business—he developed, and successfully sold, a drink he called "French Wine Coca." Based on a similar European product called "Vin Mariana," Pemberton's tonic combined wine and the extract from coca leaves, the source of cocaine. Coca extract was commonly used at the time in medicines and "temperance drinks" to increase sexual drive, treat digestive problems, calm nerves, and extend longevity. It also was used to "cure" 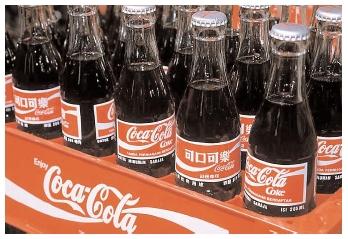 John S. Pemberton's 1886 Coca-Cola recipe contained a highly addictive stimulant extracted from coca leaves. That recipe was replaced in 1905 with one more similar to the modern beverage, which is distributed in 200 countries worldwide.
addictions to morphine, nicotine, and alcohol. This was Pemberton's first well-known and widely sold drink. Pemberton himself endorsed his "wine" as a cure for morphine addiction.

In 1885, with talk of Prohibition, Pemberton developed a drink without alcohol. Pemberton added the extract from cola nuts, a strong stimulant containing caffeine, along with the coca, and he replaced the wine with sugar syrup. On May 18, 1886, Pemberton decided on a final formula for his new drink, and Frank Robinson, one of Pemberton's partners and a part owner of his company, came up with the name Coca-Cola and the trademark logo. On June 28, 1887, the Coca-Cola trademark patent was granted. Jacobs Pharmacy, in Atlanta, Georgia, was the first place to serve Coca-Cola from a soda fountain. The cocaine was eventually removed from the drink in 1905.

Pemberton's financial troubles, along with his morphine addiction, led him to sell, trade, and give away portions of his company to various individuals. Coca-Cola eventually became one of the most prosperous businesses in the United States. Pemberton died on August 16, 1888, of stomach cancer, leaving behind many unfinished formulas. Pemberton also developed the first state-run laboratory to conduct tests on soil and crop chemicals. The facility is currently run by the Georgia Department of Agriculture.