Louis Pasteur was born in Dole, France, on December 27, 1822. He was the only son of Jean Pasteur, a poorly educated leather tanner. Pasteur was not a very good student in elementary school and he preferred fishing and painting to studying. As he got older, however, he began to show an interest in scientific subjects, especially chemistry. Although he demonstrated a lot of talent as a painter, Pasteur's father encouraged him to study throughout high school and he was accepted to the best university in France, the École Normale in Paris.

While at the university, Pasteur began to pursue his interests in science and discovery. He became a professor and researcher after graduating from college and was most interested in applying his knowledge of science to help people live healthier lives. Throughout his lifetime, Pasteur made incredible contributions to the fields of medicine, chemistry, and biology by sharing his ideas and inventions with the world. He first discovered the dangers of germs that spread infections. He also discovered treatments for deadly diseases such as tetanus, tuberculosis, diphtheria, and rabies.

Pasteur was best known for inventing the process that became known as pasteurization. In 1864, the emperor of France, Napoleon III, asked Pasteur to investigate why wine and beer became sour shortly after they were made. The souring of wine and beer was a major economic problem in France, since many farmers relied on the sale of these beverages to earn a living. 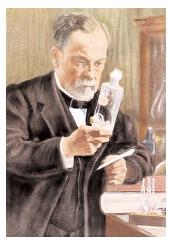 Hailed as the founder of microbiology, Louis Pasteur contributed immensely to the fields of medicine and food safety. He invented pasteurization, which prevents food spoilage, and he developed the technique of vaccination.
Pasteur traveled to a vineyard to study this problem and was able to demonstrate that bacteria and other microscopic organisms were causing the wine to spoil. These were the same types of harmful bacteria that would cause food to spoil and make some people sick.

Pasteur discovered that the tiny organisms in the wine could be destroyed by heat, without damaging the wine. Later, Pasteur demonstrated that his technique could be applied to the preservation of other beverages such as milk and juice, as well as solid foods such as cheese and meat. Using the first form of pasteurization, a food product would have to be heated at 130 degrees Fahrenheit for thirty minutes. However, Pasteur later discovered an easier method in which beverages and foods could be pasteurized for a shorter time at a higher temperature.

When Pasteur died on September 28, 1895, he was named a national hero by the French government for his important contributions to science, health, and food safety. During Pasteur's lifetime, it was not easy for him to convince others of his ideas, which were sometimes seen as controversial in the 1800s. Today, the food industry around the world continues to use the process of pasteurization to ensure that harmful organisms are eliminated from foods.