Accurate mortality and morbidity statistics for this population are limited, mainly because data on Pacific Islander Americans were classified with Asian Americans until a few years ago. Pacific Islander Americans have a high rate of obesity, and Native Hawaiians and Samoans are among the most obese people in the world. Dietary and lifestyle changes, as well as a likely genetic predisposition to store fat, are possible causes for this high rate. Lifestyles have changed from an active farming- and fishing-based subsistence economy to a more sedentary lifestyle. Pacific Islanders may be genetically predisposed to store fat for times of scarcity (the "thrifty gene" phenotype), and there is evidence that prenatal undernutrition modifies fetal development, predisposing individuals to adult obesity and chronic diseases.

Besides obesity, Pacific Islander Americans have high rate of diabetes, hypertension, cardiovascular disease, and stroke. Data collected from 1996 to 2000 suggest that Native Hawaiians are 2.5 times more likely to have diagnosed diabetes than white residents of Hawaii of similar age. Guam's death rate from diabetes is five times higher than that of the U.S. mainland, and diabetes is one of the leading causes of death in American Samoa. Overall, Pacific Islander Americans have much lower rates of heart disease than other minority groups in the United States, but it is still the leading cause of death within this population. Risk factors for and mortality from heart disease are high partly because of higher rates of obesity, diabetes, and high 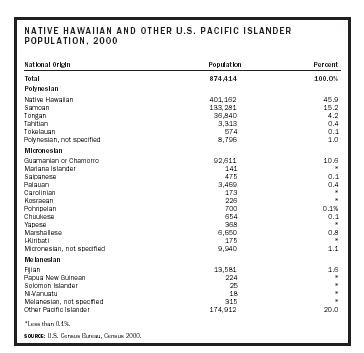 NATIVE HAWAIIAN AND OTHER U.S. PACIFIC ISLANDER POPULATION, 2000
The numbers by national origin do not add up to the total population figure because respondents may have put down more than one country. Respondents reporting several countries are counted several times. The total includes Native Hawaiian and other Pacific Islanders alone or in combination with other races or groups. Native Hawaiian and Pacific Islander population alone in 2000 was 398,835.

The cuisine of Pacific Islander Americans varies slightly from culture to culture and is a blend of native foods and European, Japanese, American, and Asian influences. As with many cultures, food plays a central role in the culture. Pacific Islander Americans typically eat three meals a day. Breakfast is usually cereal and coffee; traditional meals are eaten for lunch or dinner; and fruits, fruit juices, vegetables, and nuts (e.g., peanuts and macadamia) are eaten in abundance. Milk and other dairy products are uncommon and there is a high prevalence of lactose intolerance among Pacific Islander Americans. Thus, calcium deficiency is prevalent.

Nutrition education is needed to stimulate nutrition-related indigenous knowledge and the consumption of traditional nutrient-rich local foods as a more healthful alternative to fast foods and processed foods. There is also an urgent need for increased awareness of the health perils of obesity, especially among individuals with low socioeconomic status. Many health professionals are now emphasizing eating traditional "native" foods and encouraging residents to get back to a healthy lifestyle and to their cultural roots. Language is a major barrier to health education and medical interventions, however, and more health professionals need to be recruited from this population into health and medical fields in specific geographic areas. Professionals from the dominant (white) culture also need to become more culturally competent.

National Institute of Diabetes and Digestive and Kidney Diseases (NIDDK). "Diabetes in Asian and Pacific Islander Americans." Available from <http://diabetes.niddk.nih.gov/>