Food-borne organisms are bacteria, viruses, and parasites that can cause illnesses which are either infectious or toxic in nature. They enter the body through the ingestion of contaminated food or water. Every person is at risk of food-borne illness, although infants, the elderly, the immunocompromised, and the malnourished are particularly at risk. Food-borne illness may be mild, seriously debilitating, or even fatal. Illness is typically characterized by diarrhea, vomiting, or both, but it can also involve other parts of the body, such as the central nervous system. Food-borne illness outbreaks most often result from inadequate cooking, inadequate holding temperatures, cross-contamination, unsafe food sources, and poor personal hygiene.

Most of the available food-borne illness data is from industrialized nations, but the situation in poorer nations is probably worse. Developing countries may not have the resources needed to identify and document food-borne illness outbreaks, or outbreaks may go unreported in an effort to prevent negative publicity, which could affect a nation's tourism and trade industries.

Food-borne illnesses are a widespread and growing public health problem, both in developed and developing countries. The global incidence of food-borne illness is difficult to estimate, but it has been reported that, in 1998 alone, 2.2 million people, including 1.8 million children, died from diarrheal diseases, with a great proportion of these cases attributed to contaminated food and drinking water. Furthermore, diarrhea is a major cause of malnutrition in infants and young children.

In industrialized countries, the percentage of people suffering from food-borne illness each year has been reported to be as high as 30 percent. In the United States, for example, around 76 million cases of food-borne illness, resulting in 325,000 hospitalizations and 5,000 deaths, are estimated to occur each year. According to the U.S. Department of Agriculture, just seven food-borne organisms cause between 3.3 million and 12.3 million cases, and between 3,000 and 9,000 deaths, each year. While less well documented, developing countries bear the brunt of the problem due to the presence of a wide range of food-borne illness, including those caused by parasites and underlying food-safety problems.

Food contamination creates an enormous social and economic burden on communities and their health systems. In the United States, illness caused by the major pathogens alone are estimated to cost up to $37.1 billion annually in medical costs and lost productivity. The cost of food-borne illness in Australia is estimated at about $487 million to $1.9 billion per year. The re-emergence of cholera in Peru in 1991 resulted in the loss of $700 million in fish and fishery-product exports.

Food-borne illnesses emerge as a result of several factors. These include the globalization of the food supply, the inadvertent introduction of pathogens into new geographic areas, individual or group exposure to unfamiliar food-borne hazards while abroad, evolution of microorganisms, increases in the immunocompromised human population (those who are aging, HIV positive, or malnourished), and increases in the numbers of people eating away from home.

New variant Creutzfeldt-Jakob disease (vCJD) is a rare, fatal brain disorder that is contracted by eating meat from cows infected with bovine spongiform encephalopathy (BSE, or "mad cow disease"). The disease has an incubation period lasting years or decades and has no known cure. As of December 2003, 153 cases of vCJD had been reported worldwide, the vast majority of which were in people who had lived in the United Kingdom during a BSE epidemic that lasted from 1980 to 1996. In 2003 a cow with BSE was discovered in the United States for the first time.

Food-borne illness outbreaks can take on massive proportions. In 1988, for example, an outbreak of hepatitis A resulting from the consumption of contaminated clams affected some 300,000 individuals in China. In 1994 an outbreak of salmonellosis due to contaminated ice cream occurred in the United States, affecting an estimated 224,000 persons. In 1996 an outbreak of Escherichia coli O157:H7 in Japan affected over 6,300 school children and resulted in two deaths. Outbreaks of listeriosis have been reported in many countries, including Australia, Switzerland, France, and the United States (outbreaks in France in 2000 and in the United States in 1999 were caused by contaminated pork tongue and hot dogs, respectively). As of 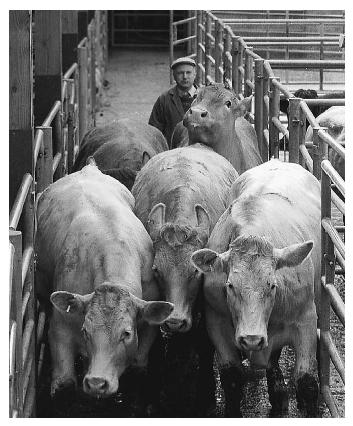 In December 2003, the USDA announced a recall of 10,410 pounds of beef that may have been exposed to the tissues of an animal that suffered from bovine spongiform encephalopathy, or so-called "mad cow disease." The recall generated a sensational response, even though other food-borne illnesses present a far greater danger to U.S. consumers.
January 2002, 119 people had developed variant Creutzfeldt-Jakob disease (the human variant of mad cow disease) secondary to exposure to infected animal products. Most of those cases were in Great Britain, but five cases were reported in France.

Bacteria causing food-borne illness include Escherichia coli O157:H7, Campylobacter jejuni, Salmonella, Staphylococcus aureus, Listeria monocytogenes, Clostridium perfringens, Vibrio parahaemolyticus, Vibrio vulnificus, and Shigella. Bacteria are responsible for more cases of food-borne illness than any other organisms. Food can be contaminated with vegetative bacteria as well as spores. Vegetative bacteria can be reduced in food by proper sanitation and cooking techniques. When conditions become ideal for growth, bacterial spores germinate and reproduce rapidly and produce toxins, which result in illness.

Viruses, such as hepatitis A virus and Norwalk virus, can also cause food-borne illness. Viruses require a living host (human or animal) to grow and reproduce; they do not multiply in foods. However, a susceptible individual 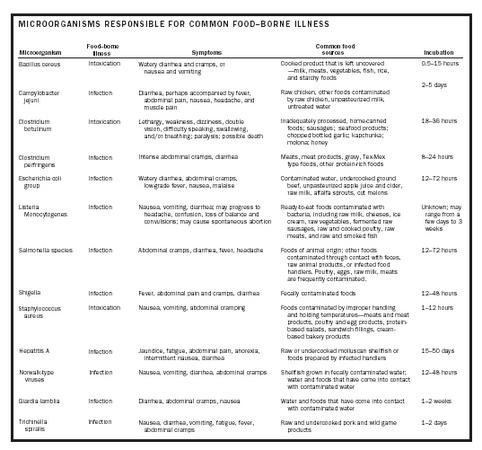 only needs to ingest a few viral particles to become ill. Frequent and proper handwashing is the most effective way to control the spread of food-borne viruses.

Parasites such as Giardia lamblia, Cyclospora cayetanensis, and Cryptosporidium parvum are another origin of food-borne illness. Parasites are small or microscopic creatures that, like viruses, require a living host to survive. Parasitic infection is far less common than bacterial or viral food-borne illness.

Other food-borne organisms include naturally occurring toxins such as mycotoxins, marine biotoxins, cyanogenic glycosides (compounds that can form cyanide when ingested), and toxins occurring in poisonous mushrooms. These can all cause severe illnesses. Mycotoxins, such as aflatoxin and ochratoxin A, are found at measurable levels in many staple foods, and the health implications of long-term exposure to such toxins are poorly understood. Although not considered food-borne organisms, cleaning solutions, some food additives, pesticides, herbicides, and heavy metals may also cause illness associated with ingestion of contaminated food.

Prevention of Food-Borne Illness at Home and in Institutions

The Hazard Analysis Critical Control Point (HACCP) system is used by institutions to anticipate and prevent food safety violations before they occur. HACCP flowcharts allow food managers to identify the critical control points, which are operations (practice, preparation step, or procedure) in the production of a food, and to make corrections as needed to prevent or eliminate hazards, or reduce them to acceptable levels. HACCP recipes provide detailed guidelines to food-service workers, and records assist health department personnel as they perform routine inspections of a facility.