Oral tissues, such as the gingiva (gums), teeth, and muscles of mastication (chewing muscles), are living tissues, and they have the same nutritional requirements as any other living tissue in the body. When adequate, nutritious food is not available, oral health may be compromised by nutrient-deficiency diseases, such as scurvy. In contrast, when food is freely available, as in many industrialized societies, oral health may be compromised by both the continual exposure of the oral environment to food and the presence of chronic diseases, such as diabetes. The diet not only affects the number and kinds of carious lesions (cavities), but also is an important factor in the development of periodontal disease (gum disease).

According to the U.S. Surgeon General's report, Healthy People 2010, dental caries have significantly declined in the United States since the early 1970s. However, it remains an important concern, especially in specific subgroups in the U.S. population. For example, 80 percent of dental caries in children's permanent teeth are concentrated in 25 percent of the child and adolescent population, particularly in individuals from low socioeconomic backgrounds.

Sugar, particularly the frequent ingestion of sweets (cakes, cookies, candy), is related to both dental caries and periodontal disease. For example, populations with a frequent exposure to sugar, such as agricultural workers in sugar-cane fields (who may chew on sugar cane while they work), have a greater number of decayed, missing, and restored teeth. Sugar (sucrose), has a unique relationship to oral health. Sucrose can supply both the substrate (building blocks) and the energy required for the creation of dental plaque (the mesh-like scaffold of molecules that harbor bacteria on tooth surfaces). Sucrose also releases glucose during digestion, and oral bacteria can metabolize the glucose to produce organic acids. However, oral bacteria can also produce organic acids from foods other than sugar.

Oral health may be related to many nutritional factors other than sugar, including the number of times a day a person eats or drinks, the frequent ingestion of drinks with low acidity (such as fruit juices and both regular and diet soft drinks), whether a person is exposed to fluoride (through fluoridated water, fluoridated toothpaste, or fluoride supplements), and whether an eating disorder is present. Not only can the diet affect oral health, but also oral health can affect eating patterns. This is particularly true in individuals with very poor oral health, who may not be able to chew without pain or discomfort. Older, edentulous (having no teeth) patients who have had a stroke with the accompanying chewing and swallowing problems may be at significant nutritional risk, particularly if they are living alone and on a limited income. Finally, malnutrition (both undernutrition and overnutrition) have specific effects on oral health.

Although oral diseases associated with vitamin deficiencies are rare in the United States and other industrialized countries, they may be common in emerging "third-world" nations. In these countries, the limited supply of nutrient-dense foods or the lack of specific nutrients in the diet (vitamin C, niacin, etc.) may produce characteristic oral manifestations. In addition, unusual food practices, such as chewing sugar cane throughout the day or other regional or cultural nutritional practices, may decrease the oral health of specific populations.

Vitamin-deficiency diseases may produce characteristic signs and symptoms in the oral cavity (mouth). For example, in a typical B-vitamin deficiency, a person may complain that the tongue is red and swollen and "burns" (glossitis), that changes in taste have occurred, and that cracks have appeared on the lips and at the corners of the mouth (angular cheilosis). In a vitamin C deficiency, petechiae (small, hemorrhaging red spots) may appear in the oral cavity, as well as on other parts of the body, especially after pressure has been exerted on the tissue. In addition, the gums may bleed upon probing with a dental instrument.

In humans, calcium deficiency rarely, if ever, causes the production of hypoplastic enamel (poorly mineralized enamel) similar to the osteoporosis produced in bone. Teeth appear to have a biological priority over bone when calcium is limited in the diet.

The proliferation of foods high in calories, fat, sugar, and salt, and low in nutritional content—such as that found in fast-food restaurants and vending machines—has created a "toxic" food environment in many industrialized countries, and this has had an important impact on oral health. Oral bacteria have the ability to synthesize the acids that dissolve tooth enamel from many different types of foods, not just sugar. Frequency of eating is a major factor related to poor oral health in infants, as well as children and adults. Baby bottle tooth decay, also called nursing bottle caries, is a term that refers to the caries formed when an infant is routinely put to sleep with a bottle. Breastfeeding caries is a condition associated with the constant exposure of an infant's oral environment to breast milk, while pacifier caries occurs when a pacifier is dipped in honey prior to inserting the pacifier into an infant's mouth.

Both childhood and adult obesity are on the rise, and they have reached epidemic proportions in some countries. Obesity is traditionally associated with increased rates of non-insulin-dependent diabetes; elevations in blood pressure; and elevated serum glucose, blood cholesterol, and triglycerides (blood fat)—but it is also associated with decreased oral health status. For example, the number of servings of fruit juice and soft drinks ingested each 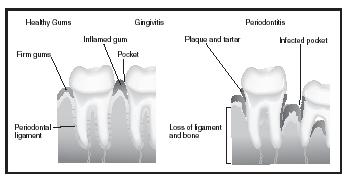 Oral diseases like gingivitis (left) and periodontitis (right) may result from overnutrition. When food consumption is excessive, or when the foods consumed are frequently sugary or acidic, the enamel on teeth can dissolve and gums can be infected.
day is correlated not only with obesity in children, but also with increased caries. The American Academy of Pediatrics has warned parents on the overuse of fruit juices in children's diets.

Although diet soft drinks do not contain sugar, they do contain both carbonic and phosphoric acids and can directly destroy tooth enamel, particularly if the teeth are periodically exposed to a diet drink throughout the day. The direct demineralization of tooth enamel by regular and diet soft drinks has similarities to the demineralization of tooth enamel common in anorexia nervosa, in which forced regurgitation of food exposes lingual tooth surfaces (the side of the tooth facing the tongue) to stomach acids. In the case of enamel erosion produced by soft drinks and juices, effects are usually seen on all the tooth surfaces.

No discussion of nutrition and oral health would be complete without mentioning the role of the micronutrient fluoride. The addition of fluoride to the public drinking water supply is rated as one of the most effective preventive public health measures ever undertaken. Fluoride reduces dental caries by several different mechanisms. The fluoride ion may be integrated into enamel, making it more resistant to decay. In addition, fluoride may inhibit oral microbial metabolism, lowering the production of organic acids.

The relationship of nutrition to oral health includes much more than a simple focus on sugar's relationship to caries. It includes factors such as an individual's overall dietary patterns, exposure to fluoride, and a person's systemic health.