Medications have become an integral part of life for many people. Medicine serves to help people when they are sick, allowing them to live longer and healthier lives. With rapidly growing research and technology, medications are more beneficial, and new ones continue to be discovered. Drugs do need to be taken with caution, however. All medications, whether prescribed by a doctor or bought over-the-counter, are capable of harmful side effects. The foods people eat contain nutrients that are used by the body to produce energy. Sometimes, certain medications may interact with both the food eaten and the nutrients the food gives to the body for proper functioning. When the body is unable to use a nutrient due to a drug that has been taken, a nutrient-drug interaction has occurred.

Function of a Drug

A drug is taken to prevent or treat sickness and disease. It is important to know what happens in the body when a drug is taken in order to better understand the interaction between nutrients and drugs. The action of a drug taken orally generally occurs in four steps: (1) the drug dissolves in the stomach, (2) the drug is absorbed into the blood and moves via the blood to the area of the body that needs it, (3) the body reacts to the medicine, and (4) the body gets rid of the drug by way of the kidney, liver, or both.

A nutrient-drug interaction may impact the body in several ways. Certain foods can affect the rate at which the body uses a medication. A drug will not work as well if a certain nutrient in a food speeds up or slows down the 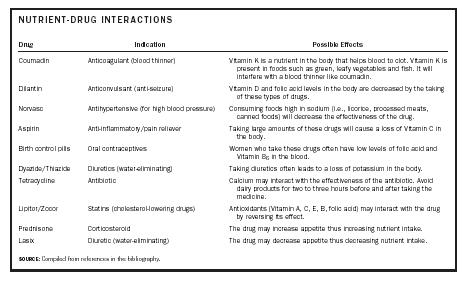 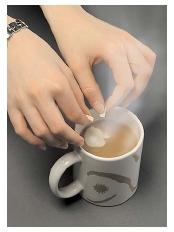 Some drugs may affect the absorption of nutrients, while some foods—for example, those containing caffeine—can amplify or modify the effects of certain drugs. Taking drugs with hot beverages could also make them less effective.

Impact of Food on Effectiveness of a Drug

A medication has ingredients, just as food does, that allow it to function correctly when taken in order to help the body in some way. A food may interfere with the effectiveness of a drug if the food interacts with the ingredients in the medication, preventing the drug from working properly. Nutrients in food may either delay absorption into the body or speed up elimination from the body, either or which can impact a drug's effectiveness. For example, the acidic ingredients in fruit juices are capable of decreasing the power of antibiotics such as penicillin. Tetracycline, another infection-fighting drug, is impacted by the consumption of dairy products. Many medications that are taken to fight depression can be dangerous if mixed with beverages or foods that consist of tyramine, which is found in items such as beer, red wine, and some cheeses.

A drug has the capacity of interfering with a person's nutritional status. Appetite may be stimulated by a certain drug, resulting in an increase in nutrient intake due to more food being eaten. However, drugs may also cause a decrease in appetite, leading to a decrease in nutrient intake. In this case, a drug could possibly cause a nutritional deficiency. Nutritional status may also be impacted by a drug's effect on the three main nutrients: carbohydrates, fat, and protein. A drug may speed up or slow down the breakdown of these three nutrients, which are essential to the body's functioning. When a drug affects the absorption of nutrients from food into the body, less energy is available to be used by the body. The impact of the nutrient-drug interaction may vary according to the medicine taken, the dose of the medicine given, and the form taken (e.g., pill, liquid).

The Elderly and Nutrient-Drug Interactions

Elderly persons are at a significant risk for nutrient-drug interactions. This population often takes the highest amount of medications, and with the use of multiple drugs, certain problems may exist. A loss of appetite, a reduced sense of taste and smell, and swallowing problems all may result from medication use in elderly people.

Malnutrition is a common problem among older adults. Therefore, nutritional status may be already impacted by decreased nutrient intake. This may only worsen the effect of a possible nutrient-drug interaction. Elderly people who take many drugs on a routine basis for long periods of time are at greatest risk of nutrient depletion and nutritional deficiencies.

There are ways to avoid placing the body at risk of an unwanted nutrient-drug interaction. The following are tips to remember about taking medications and will help avoid interactions:

University of Florida, Cooperative Extension Service, Institute of Food and Agricultural Sciences. "Food/Drug and Drug/Nutrient Interactions: What You Should Know about Your Medications." Available from <http://edis.ifas.ufl.edu/HE776>