Food-borne illness, often called food poisoning, is caused by pathogens or certain chemicals present in ingested food. Bacteria, viruses, molds, worms, and protozoa that cause disease are all pathogens, though there are also harmless and beneficial bacteria that are used to make yogurt and cheese. Some chemicals that cause food-borne illness are natural components of foods, while others may be accidentally added during production and processing, either through carelessness or pollution. The main causes of food-borne illness are bacterial (66%), chemical (26%), viral (4%) and parasitic (4%).

The two most common types of food-borne illness are intoxication and infection. Intoxication occurs when toxins produced by the pathogen cause food poisoning. Infection is caused by the ingestion of food containing pathogens. Some people develop symptoms after ingesting a pathogen, while others never know that they are suffering from food-borne illness. The people that are most at risk are those with compromised immune systems. For these individuals, an incident of food-borne illness can be life threatening. Sanitation procedures, such as hand washing, separating at-risk foods (such as raw meat) from fresh vegetables, cooking foods, and chilling prepared foods, can help prevent food poisoning.

The following organisms can cause food-borne illness: Campylobacter jejuni, Clostridium botulinum, Clostridium perfringens, Cyclospora cayetanensis, Escherichia coli,(E. coli 0157:H7), Listeria monocytogenes, Salmonella, Shigella, and Staphylococcus aureus. Campylobacter jejuni is caused by the ingestion of live bacteria and can be transmitted to humans via unpasteurized milk, contaminated water, and raw or undercooked meats, poultry, and shellfish. Clostridium botulinum, which causes botulism, is the most deadly of all food pathogens. It is transmitted by improperly canned food, whether it is home-canned or commercially prepared. Clostridium perfringens is transmitted by eating heavily contaminated food, and it tends to infect those who eat food that has been left standing on buffets or steam tables for long periods. Feces-contaminated food or water transmits Cyclospora cayetanensis. 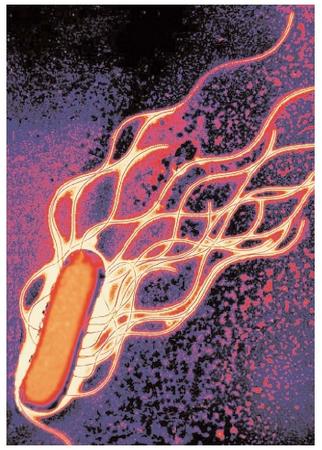 A transmission electron micrograph (TEM) shows a Salmonella sp. bacterium. The bacterium is transmitted through contact with a carrier or by ingestion of contaminated meat or dairy products.
Foods such as undercooked hamburger or ground poultry and unpasteurized milk or apple juice can transmit E. coli 0157:H7. Listeria monocytogenes can be transmitted to humans via unpasteurized dairy foods, such as milk, soft cheeses, and ice creams, and via leafy vegetables and processed meats. Salmonella is transmitted by eating contaminated food or by contact with a carrier (a human or animal capable of transmitting infectious organisms). Salmonella poisoning may also occur through cross-contamination of uncontaminated foods that have come into contact with uncooked foods. This may occur when one uses the same cutting board to cut both raw chicken and fresh vegetables.

Shigella is a contamination of food by infected food handlers; it is primarily transmitted in cold salads such as tuna, chicken, or potato salad. Staphylococcus aureus is transmitted by carriers and by eating foods that contain the toxin.

Other substances that cause food poisoning include: mold, Trichinella spiralis, and dysentery. Mold is a type of fungus. Some molds produce a mycotoxin called aflatoxin that can develop in spoiled peanuts and peanut butter, soybeans, grains, nuts, and spices. Trichinella spiralis is a parasitic worm that can be present in undercooked pork. Dysentery is a disease caused by microorganisms (protozoa) that are introduced to food by carriers or contaminated water.

Symptoms of food-borne illness often resemble intestinal flu, and they may last a few hours or several days. Serious complications may include bloody diarrhea, severe abdominal cramps, severe illness, or death. Typical symptoms include diarrhea, vomiting, abdominal cramps, headaches, nausea, dry mouth, double vision, difficulty swallowing, and flu-like symptoms (such as fever, chills, and backache). Older adults, pregnant women, infants, and people with compromised immune systems (such as those with diabetes, AIDS, or cancer) may face greater risks and have a higher incidence of food-borne illness.

It is important to prevent food-borne illness by cleaning, separating, cooking, and chilling foods appropriately. Hands and surface areas should be cleaned with hot soapy water, and food handlers must practice good personal hygiene and sanitary food preparation. Raw fruits and vegetables should be washed thoroughly, and unpasteurized milk, bulging cans, and foods showing signs of mold should always be avoided. In order to avoid cross-contamination, raw foods should be kept separate from cooked foods.

Ground meats should be cooked at or above 165 degrees. Cooking to proper temperatures and time will kill harmful bacteria that cause food-borne illness. Bacteria multiply rapidly between 40 and 140 degrees. However, the danger zone is between 60 and 125 degrees Fahrenheit. Temperatures in this zone allow rapid growth of bacteria and production of toxins by some bacteria. Therefore, foods should be refrigerated, since cold temperatures keep most harmful bacteria from growing and multiplying. It is recommended that refrigerators be kept between 34 and 38 degrees, while freezers should be kept at 0 degrees. Most food-borne illnesses occur because of the ignorance or carelessness of people who handle food, and such illnesses can be easily prevented.

Amid the technological marvels of the twenty-first century, health care specialists agree that the single most effective way to prevent the transmission of disease is by washing your hands. Unwashed hands are thought to be responsible for one-quarter of food-borne illnesses, including E. coli and salmonella, and are a major means of transmission for SARS, meningitis, hepatitis, and the common cold. Studies have shown that infection rates in schools and day-care centers plummet after the launch of hand-washing campaigns. The most important times to wash your hands are after using the toilet or handling a diaper, handling raw food such as chicken, sneezing or coughing into your hand, or being out in public. While anitbacterial soaps are considered no more effective than regular soaps, alcohol gels in "hand sanitizers" have received high praise for their ability to eliminate germs.

Persons suffering from a food-borne illness should consult a physician if the following symptoms persist for more than two or three days: a fever of 102 degrees or higher, presence of blood in the stool, or dehydration (as indicated by dizziness upon standing). Medical help should also be sought if botulism is suspected. Dehydration caused by diarrhea and vomiting should be treated promptly with increased fluid intake or oral rehydration solutions. Sports beverages with electrolytes may be helpful. Bed rest can speed recovery, and while ill, any food consumed should be clean, easy to digest, and consumed in small amounts.