Homelessness is a global problem. According to a 1996 United Nations report, 500 million people worldwide were homeless or residing in low-quality housing and unsanitary conditions in 1995. The number of homeless continues to rise, however, and quantifying this population is difficult. Most homelessness rates are reported by service providers, and countries with the best-developed service systems will therefore report the highest number of homeless, a condition referred to as the service-systems paradox. Various other problems, such as double-counts, overcounts, the problem of mobility, and hidden homelessness also affect estimates.

In the United States, homelessness gained national attention in the early 1980s. While some people thought the growth in the homeless population was a result of the recession that occurred during this period, the problem has not gone away.

A way to get at the root of the problem is to understand the causes of homelessness. Worldwide, homelessness is caused by a breakdown in traditional family support systems, continued urbanization, the effects of structural adjustment programs, civil wars, and natural disasters. A shortage in affordable rental housing and an increase in poverty are thought to be two major factors contributing to the rise of homelessness in the United States. Other potential causes are the lack of affordable health care, domestic violence, mental illness, and addiction disorders. Often, individuals will have several risk factors causing them to "choose between food, shelter, and other 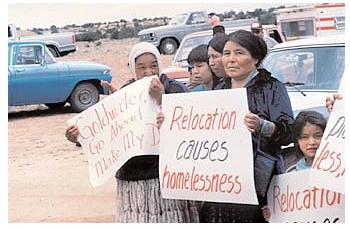 The forced relocation of Native Americans from their ancestral lands has fueled homelessness among that population. Other homeless people have lost their homes to pay for unexpected medical expenses, or because of economic hardship.
basic needs" (National Coalition for the Homeless, p. 6). Shelter is often the lowest priority, and is often unaffordable, and thus homelessness becomes a problem. Similar risk factors affect both the homeless and those who are experiencing poverty. Because homelessness and poverty are linked, efforts to improve poverty will inevitably decrease homelessness.

Economics of Poverty and Undernutrition

Around the world, poverty is pervasive: one billion people lived in poverty in 2001. Poverty and hunger are undeniably linked, so that solving the hunger problem by feeding people, without attacking the poverty problem, does not address the root cause of poverty.

In 1999, 31 million households (10.1%) in the United States were on the verge of hunger, while 3 percent of households were hungry. Even more startling, between 750 and 800 million people around the world were hungry in 1996. Of these, 550 million were in Asia, while 170 million were in sub-Saharan Africa. Along with hunger comes undernutrition, which can pose serious health threats.

The Institute of Medicine has estimated the number of homeless children in the United States to be approximately 100,000 each night. Almost half of these children are younger than six years of age. Although this is a growing population, few studies have examined the effect of undernutrition on homeless children. However, recent studies have found that a poor diet in early childhood has implications for long-term health and cognitive development.

Homeless children suffer several medical problems due to undernutrition, including chronic and recurring physical ailments, and higher rates of fever, cough, colds, diarrhea, and obesity. In addition, a greater incidence of infections, fatigue, headaches, and anemia, as well as impaired cognitive development and visual motor integration, has been documented in homeless children.

The Food Stamp Program provides coupons for low-income families that enable them to buy food. The coupons are dispersed on a monthly basis, with the purpose of reducing hunger and malnutrition.

Through the National School Lunch Program (NSLP), schools can be reimbursed for providing nutritious meals to children. A nutritious school lunch provides children with one-third or more of their Recommended Dietary Allowance (RDA) for nutrients.

Similar to the NSLP, the School Breakfast Program offers reimbursements to schools for providing breakfast to students. This breakfast provides one-fourth or more of their RDA for nutrients. In addition, meals and snacks are provided for children at risk for hunger through the Summer Food Service Program for Children. The food is usually provided during educational and recreational activities, and one-third of the children's RDA is provided through this program.

The Special Supplemental Nutrition Program for Women, Infants and Children (WIC) has a mission to improve the diets of women, infants, and children by providing monthly food packages that include certain foods.

Federal funds are provided to public and nonprofit child-care centers, family and group child-care homes, and after-school programs for meals and snacks to the populations they serve through the Child and Adult Care Food Program (CACFP). The programs are required to follow the nutrition standards set by USDA when providing meals.

Through the Emergency Food Assistance Program (TEFAP), food is distributed through emergency food shelters. The food is provided through surplus commodities purchased by the United States Department of Agriculture (USDA). Low-income families are served as well.

Finally, the Community Food and Nutrition Program (CFNP) is the source of federal funding for programs providing hunger relief and improving nutrition for low-income individuals. The funding is provided on the local, state, and national levels.

Examples of organizations seeking to provide solutions to hunger and homelessness include the Food Research and Action Center, America's Second Harvest, the Center on Hunger and Poverty, Bread for the World, World Hunger Year, and the Food Industry Crusade Against Hunger. These organizations provide coordination and support to antihunger networks of food banks and food assistance programs, education of the public, and encouragement to policy makers for the expansion and protection of programs aiding the homeless.

Deficits in the Diet

Many homeless people rely on shelters and soup kitchens for their food intake. However, these sites may not provide an adequate diet. "Most shelters rely on private donations, a local food bank, and surplus commodity distributions. Because the nutritional quality and quantity of these resources vary greatly over time, meals may be nutritionally limited, even though the quantity of the food served may be acceptable to the recipient" (Wolgemuth et al., 1992, p. 834). Furthermore, easily stored and prepared foods do not provide the best nutritional value. These items are typically "high in salt, fat, preservatives, and empty calories (i.e., calories with little or no nutritional value), and low in variety, fiber, and protein" (Strasser et al., 1991, p. 70).

Due to the food sources of the homeless, deficits in the diet have been documented in numerous studies. The B vitamins, vitamin C, zinc, calcium, thiamine, folic acid, magnesium, and iron are all commonly found to be deficient in the homeless. Iron deficiencies are particularly common among the homeless, leading to high rates of anemia. In addition, the food that is likely to be offered at most local shelters and soup kitchens is high in salt, fat, and cholesterol, contributing to a high incidence of hypertension among the homeless.

Clearly, the homeless are a widely varied population, and responses to homelessness must also be varied in nature. Several such responses are needed. These include: prevention of homelessness through improving the housing stock; improving outreach through increased soup kitchens, emergency responses, and night shelters; and creating supportive housing to help homeless persons reintegrate into society. Interagency coordination to improve services and the provision of enterprise development and skills training to improve the economic survival of the homeless are also needed. Finally, federal and local governments must be involved in efforts to help the homeless through policy development. This multifaceted approach will ensure a more effective response to homelessness.

National Coalition for the Homeless (2002). "Facts about Homelessness." Available from <http://www.nationalhomeless.org>

U.S. Department of Housing and Urban Development. Homelessness: Programs and the People They Serve. Available from <http://www.huduser.org/publications>

World Hunger Year. "Hunger, Poverty and Homelessness in the U.S." Available from <http://www.worldhungeryear.org>