Greeks and Middle Easterners, Diet of

The "Mediterranean diet" gained much recognition and worldwide interest in the 1990s as a model for healthful eating habits. The diet is based on the traditional dietary patterns of Crete, a Greek island, and other parts of Greece and southern Italy. The diet has become a popular area of study due to observations made in 1960 of low incidences of chronic disease and high life-expectancy rates attributed to the populations who consumed a traditional Mediterranean diet. This healthful diet model goes far beyond the use of particular ingredients and recipes. It attains its full meaning in the context of climate, geography, customs, and the way of life of Mediterranean peoples.

In efforts to understand the Mediterranean diet, it is necessary to first learn about the many countries that border the Mediterranean Sea. The diet is closely tied geographically to areas of olive oil cultivation in the Mediterranean Basin. It can be defined by diets of the early 1960s in Greece, southern Italy and other Mediterranean regions in which olive oil was the principal source of dietary fat. The olive remains the most typical Mediterranean tree because it has adapted to the regional climate of long, very hot, dry summers and mild, damp winters.

The lands surrounding the Mediterranean Sea contain some of the oldest cultures on Earth. Greece, as well as other countries of Europe, North Africa, and some Middle Eastern nations, played a central role in the expansion of empires and cross-cultural exchanges over the centuries. Over 2,000 years ago trade by means of sea routes allowed Greek, Roman, Phoenician, Carthaginian, Arab, and Oriental products and traditions to intermix, resulting in mutual enrichment and an evolution of what is now incorporated into the Mediterranean diet. However, many different diets exist throughout the Mediterranean region, and there is no such thing as just one Mediterranean diet. Variations of this diet have traditionally existed in the North African countries of Morocco and Tunisia, parts of Turkey, and other Middle Eastern countries such as Lebanon and Syria.

Traditional eating habits of Mediterranean countries, and those countries along the basin, include olives, fish, lamb, wheat, rice, chick peas and other 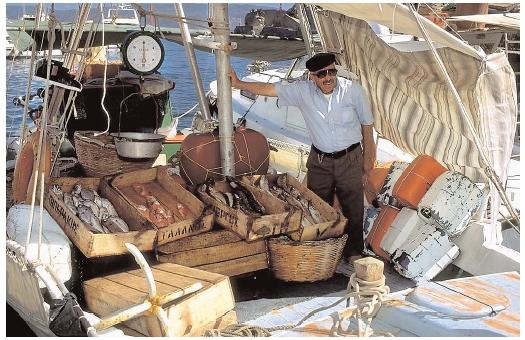 In ancient times, sea trade brought many of the world's cultural and culinary achievements to the nations around the Mediterranean Sea. More recently, the Mediterranean diet—which features low-cholesterol foods such as vegetables and fish, and includes very little meat—has been recognized as one of the world's healthiest.
legumes, pistachios, dates, cheese, and yogurt. Bread typically accompanies each meal.

Grilling, frying, grinding, and stewing are the most common ways of preparing meats in countries bordering the Mediterranean Basin. A whole, roasted lamb or leg of lamb is a special dish prepared for festive gatherings. Spices and seasonings are essential in the preparation of Middle Eastern dishes. Common spices and herbs include dill, garlic, mint, cinnamon, oregano, parsley, leek, and pepper.

Many Middle Eastern nations, such as Turkey, Syria, and Lebanon, have predominantly Muslim populations. Eating halal is obligatory for every Muslim. Halal is an Arabic word meaning "lawful" or "permitted," and refers to Islamic law regarding the diet. Animals such as cows, sheep, goats, deer, moose, chickens, ducks, and game birds are halal, but they must be zabihah (slaughtered according to Islamic method) in order to be suitable for consumption. Halal foods are those that are:

Today, the Mediterranean region is characterized by a high increase in modernization. The traditional diet of the Mediterranean region has been affected by modernization, particularly in the area of agricultural production for trade. The countries of North Africa and the Middle East struggle the most with modernization problems. This has led to an increase in the dependence on costly food imports from outside the region. While the Greek economy remains rooted in agriculture and the government places a strong emphasis on agricultural reforms, Middle Eastern nations face constraints such as high rates of urbanization, leading to the loss of vital agricultural land.

Modernization has created significant changes in food consumption patterns in the countries of the Mediterranean region. The factors affecting the traditional dietary customs of the region are economy, environment, society and culture, disasters (e.g., war, drought), the expansion of food industries, and advertising campaigns promoting certain foods (e.g., soda, candy bars). Fast-food restaurant chains are also altering traditional diets. The expansion of fast food has resulted in the population consuming processed foods such as sweets and snack foods, which were never a part of their nutritional sustenance. 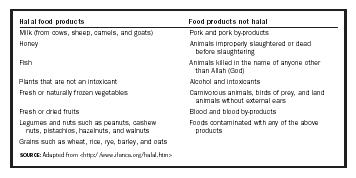 Mediterranean and Middle Eastern culture is centered on a strong patriarchal family. This has lessened in recent years, but family ties are still strong. Customs and family traditions influence nutrition greatly.

Food is an integral part of family celebrations, special days of honor, and festivals. In the Middle Eastern nation of Israel, kosher dietary laws concerning the selection, preparation, and eating of food remains influential in Jewish life. The Jewish laws of kashrut, or keeping kosher, determines which foods are kosher and which are non-kosher. Many ancient practices and rituals, handed down from generation to generation, are observed.

Many people from Mediterranean and Middle Eastern cultures observe Islam and Eastern Orthodox religions, which influence the kinds of food chosen and how the foods are combined. Fasting from sunrise to sunset is a Muslim religious obligation practiced during the sacred month of Ramadan. Muslims do not eat any form of pork, or any meat that has been slaughtered without mentioning God's name. Muslims cannot drink alcoholic beverages or foods flavored with alcohol—which differs from Greek and other Mediterranean cultures, where wine is a large part of the diet. Middle Easterners also have a high incidence of lactose intolerance, and therefore fresh milk is not widely consumed.

The wide use of olive oil in food preparation throughout the Mediterranean region contributes to a diet high in monounsaturated fatty acids and cultures commonly known for lower blood pressure among their populations. Recent research has produced scientific proof that a Mediterranean diet (which includes olive oil) is not only generally healthful, but that consuming olive oil can actually help lower harmful low density lipoprotein (LDL) cholesterol (often referred to as "bad" cholesterol). Olive oil contains antioxidants that discourage artery clogging and chronic diseases, including cancer.

The Mediterranean diet offers a practical and effective strategy that is relatively easy to adopt and more likely to be successful over the long term than most heart-healthy nutrition plans. In April 2001, the American Heart Association (AHA) published a science advisory stating that some components of the Mediterranean diet may be beneficial when used in conjunction with the association's traditional diets for the prevention and treatment of cardiovascular disease.

In the Mediterranean diet, not all fat is regarded as bad, however. In fact, the focus of the diet is not to limit total fat consumption, but rather to make wise choices about the type of fat in the diet. The Mediterranean diet is low in saturated fat, which is found mostly in meat and dairy products, vegetable oils such as coconut and palm oils (tropical oils), and butter. The diet views two types of protective fats, omega-3 fatty acids and monounsaturated fats, as healthful and places no restrictions on their consumption. Omega-3 fatty acids are found in fatty fish (e.g., sardines, salmon, tuna) and in some plant sources (e.g., pistachios, walnuts and other tree nuts, flaxseed, various vegetables). Monounsaturated fat is abundant in olive oil, nuts, and avocados.

Because the Mediterranean diet emphasizes eating whole, natural foods, it is extremely low in trans-fatty acids, which are increasingly recognized as important contributors to heart disease. These fats are found in hard margarine and deep-fried and processed snacks and food, including fast food and commercially baked products. They are similar to saturated fats and are known to raise levels of LDL cholesterol. Eating a diet incorporating the traditional foods of the Mediterranean, such as a variety of fruits and vegetables, has been shown to decrease the risk of heart disease. Five important dietary factors may contribute to the cardioprotective effect of this eating pattern. These are the inclusion of fish rich in omega-3 fatty acids, olive oil, nuts, and moderate amounts of alcohol, and the exclusion of transfatty acids.

Many common characteristics exist among the countries along the Mediterranean Basin, but each country has adapted to the geography and developed its own customs. The common core, however, can be seen in the diets of these countries. It is important to remember that the Mediterranean diet emphasizes eating whole, unprocessed foods that are extremely low in harmful LDL cholesterol. Recent studies indicate that the use of natural, monounsaturated oils such as olive oil, a balanced intake of vegetables and fish, and a low intake of red meats provides a natural defense against cardiovascular disease. Although more research is needed, the Mediterranean way of eating is potentially an ideal diet to improve the health of people by warding off illnesses.

"Health Benefits of Olive Oil and the Mediterranean Diet." Available from <http://www.mediterraneandiet.gr>

Islamic Food and Nutrition Council of America. "What Is Halal?" Available from <http://www.ifanca.org/halal.htm>