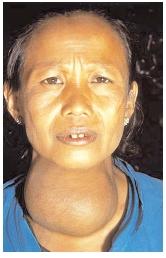 An example of grade III (large and visible) goiter. Most cases of goiter in the developing world are due to an iodine deficiency. Unable to meet the body's hormonal needs, the thyroid becomes enlarged to compensate.

A goiter is a noncancerous enlargement of the thyroid gland in the front of the neck. Many conditions can cause goiter, but the most common is a lack of sufficient iodine in the diet, which is usually a result of the soil in which food is grown being iodine-poor—a condition that occurs in many mountainous regions away from the sea. Iodine is required for the production of thyroid hormones, which regulate the body's metabolism.

About 740 million people have goiters, but the percentage varies greatly by region (eastern Mediterranean: 32%; Africa: 20%: Europe: 15%; Southeast Asia: 12%; western Pacific: 8%; the Americas: 5%). Surveying communities for goiters is one of the best ways of detecting iodine deficiency, which, if not treated, can cause stillbirths, miscarriages, cretinism, mental impairments, deafness, and dwarfism.

Iodine deficiency is the most common preventable cause of brain damage and mental retardation, affecting about 50 million people worldwide. However, these disorders have been tremendously reduced simply by using table salt fortified with iodine.

Adults require at least 20 micrograms of iodine daily, but 150 micrograms is recommended. Seafoods are excellent sources, while the iodine content of other foods varies depending on animal feed and soil. Iodism (iodine poisoning) is a rare condition that results in weakness, swollen salivary glands, a metallic taste in the mouth, and a runny nose.

International Council for the Control of Iodine Deficiency Disorders. "About IDD." Available from <http://www.people.virginia.edu/~jtd/iccidd>