A number of factors influence the digestion and absorption rate of food, including ripeness, particle size, the nature of the starch, the degree of processing and preparation, the commercial brand, and the characteristics of the diabetic patient, and these factors naturally affect each food's glycemic index position or rank. In addition, differences exist in the glycemic indeces of foods due to the choice of reference food, the timing of blood sampling, or the computational method used to calculate the glycemic index. 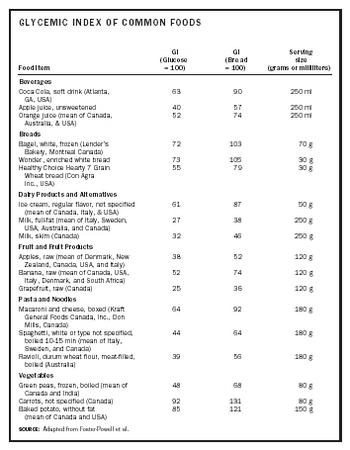 The objectives of diet management in diabetic patients are to reduce hyperglycemia, prevent hypoglycemic episodes, and reduce the risk of complications. For people with diabetes, the glycemic index is a useful tool in planning meals to achieve and maintain glycemic control. Foods with a low glycemic index release sugar gradually into the bloodstream, producing minimal fluctuations in blood glucose. High GI foods, however, are absorbed quickly into the bloodstream causing an escalation in blood glucose levels and increasing the possibility of hyperglycemia. The body compensates for the rise in blood sugar levels with an accompanying increase in insulin, which within a few hours can cause hypoglycemia. As a result, awareness of the glycemic indices of food assists in preventing large variances in blood glucose levels.

Experts disagree regarding the use of the glycemic index in athletes' diets and in exercise performance. Insufficient evidence exists supporting the benefit of low glycemic meals prior to prolonged exercise. Nonetheless, a low GI pre-event meal may be beneficial for athletes who respond negatively to carbohydrate-rich foods prior to exercise or who cannot consume carbohydrates during competition. Athletes are advised to consume carbohydrates of moderate to high GI during prolonged exercise to maximize performance, approximately 1 gram per minute of exercise. Following exercise, moderate to high GI foods enhance glycogen storage.

National Institute of Diabetes and Digestive and Kidney Diseases. "Diabetes." Available from <http://www.niddk.nih.gov>