Functional foods are foods that provide health benefits beyond basic nutrition due to certain physiologically active components, which may or may not have been manipulated or modified to enhance their bioactivity. These foods may help prevent disease, reduce the risk of developing disease, or enhance health. Consumer interest in functional foods increased during the late twentieth century as people's interest in achieving and maintaining good health increased. Health-conscious consumers have become aware of the health benefits associated with specific foods and are incorporating elements such as fiber, calcium, and soy into their diets. Rapid advances in food science and technology, an aging population, the rapid rise in health care costs, 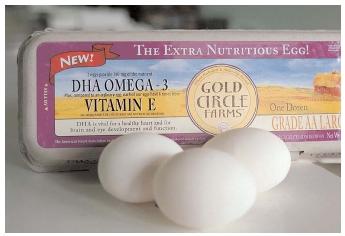 By feeding their hens a modified diet, some farms have increased the amount of omega-3 in the eggs they sell. These eggs are considered to be functional food because their higher omega-3 content can improve the health of consumers whose diets are deficient in that fatty acid.
and changing government marketing and labeling regulations have also had an impact on the functional foods market.

There is a difference between the Western and Eastern perspective on functional foods. In the West, functional foods are considered revolutionary and represent a rapidly growing segment of the food industry. Food and pharmaceutical companies alike are competing to bring functional foods into the mass market. On the other hand, functional foods have been a part of Eastern cultures for centuries. Foods were used for medicinal purposes in traditional Chinese medicine as early as 1000 B.C.E. From ancient times, the Chinese have used foods for both preventive and therapeutic health effects, a view that is now being increasingly recognized around the world.

Clearly, most foods are functional in some way. What makes a "functional food," however, is its potential ability to positively affect health. Functional foods range from fruits, vegetables, and whole grains, which are naturally high in phytochemicals, to products in which a specific ingredient is added, removed, increased, or decreased. Examples of functional foods include soy, oats, flaxseed, grape juice, broccoli and other cruciferous vegetables, phytosterol/stanol-enriched margarine, eggs enhanced with omega-3 fatty acids, foods fortified with herbal preparations, and psyllium.

Functional foods are regulated by the United States Food and Drug Administration (FDA) under the authority of two laws. The Federal Food, Drug, and Cosmetic Act (FD&C) of 1938 provides for the regulation of all foods and food additives. The Dietary Supplement Health and Education Act (DSHEA) of 1994 amended the FD&C Act to cover dietary supplements and ingredients of dietary supplements. Functional foods may be categorized as whole foods, enriched foods, fortified foods, or enhanced foods. Labeling claims that are used on functional foods are of two types: (1) Structure and function claims, which describe effects on normal functioning of the body, but not claims that the food can treat, diagnose, prevent, or cure a disease (claims such as "promotes regularity," "helps maintain cardiovascular health," and "supports the immune system" fit into this category); and (2) Disease-risk reduction claims, which imply a relationship between dietary components and a disease or health condition. 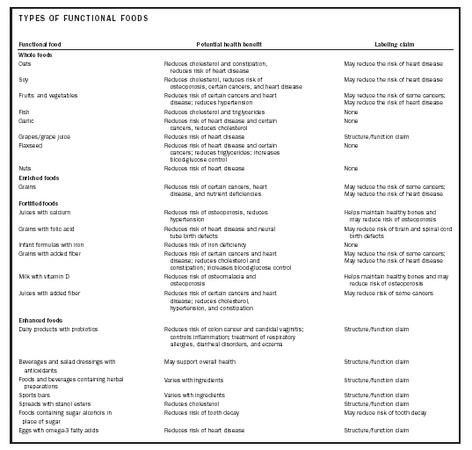 Disease-risk reduction claims, typically called health claims, do require FDA approval before they can be used on products and must reflect scientific consensus. For example, the health claim for soy protein and its relation to cardiovascular disease reads: "Diets low in saturated fat and cholesterol that include 25 grams of soy protein a day may reduce the risk of heart disease. One serving of (name of food) provides ____ grams of soy protein." This claim may appear only on soy products that provide at least 6.25 grams of soy protein per serving. Other FDA-approved health claims include those related to fruits and vegetables and a reduced risk of cancer; saturated fat and an increased risk of heart disease; sodium and increased risk for hypertension, and folic acid–fortified foods and reduced risk of neural tube defects.

Many developed functional foods seem to have benefits for human health. For example, calcium-fortified orange juice provides approximately the same amount of calcium as milk. With more than half of all children under the age of five and nearly 85 percent of females age twelve to nineteen not meeting the Dietary Reference Intake (DRI) for calcium, calcium-fortified orange juice may contribute significantly to calcium intake. On the other hand, a positive impact on health is more difficult to establish for other developed functional foods. These include prepared foods spiked with herbal preparations, which may contain little of the herbal ingredients listed on the label, or insufficient quantities of these ingredients to produce the claimed effect. Additionally, some herbal ingredients can be harmful, such as kava, which has been associated with liver damage, and belladonna, which is toxic.

The future of functional foods will undoubtedly involve a continuation of the labeling and safety debates. As consumers become more health conscious, the demand and market value for health-promoting foods and food components is expected to grow. Before the full market potential can be realized, however, consumers need to be assured of the safety and efficacy of functional foods. Future research will focus on mechanisms by which food components such as phytochemicals positively affect health, and whether these components work independently or synergistically. According to the American Dietetic Association, dietetics professionals will be increasingly called upon to develop preventive meal plans, to recommend changes in food intake, to enhance phytochemical and functional food intake, and to evaluate the appropriateness of functional foods and dietary supplements to meet preventive (and therapeutic) intake levels for both healthy persons and those diagnosed with disease.