The Food Guide Pyramid is a graphic representation of A Pattern for Daily Food Choices, a food guide that was developed by the U.S. Department of Agriculture (USDA) in the 1980s. Food guides are tools designed to help people select healthful diets. The USDA has been developing food guides since 1916, and recommendations have changed over the years due to emerging knowledge about nutrient needs and the relationships between diet and health, changing economic conditions (such as the Great Depression in the 1930s), and changing lifestyles.

A Pattern for Daily Food Choices replaced the Basic Four food guide which was the centerpiece of nutrition education in the United States for over twenty years. The new food guide was not widely used in nutrition education until the USDA released The Food Guide Pyramid in 1992. Since that time, nutrition educators, dietitians, and teachers have used the Pyramid and accompanying educational materials to teach people how to select foods to build healthful diets. The Pyramid is also a familiar feature on food labels, where it is used by food manufacturers to show where foods fit into the food groups that make up the Pyramid.

Design and Recommendations of The Food Guide Pyramid

USDA nutritionists spent many years designing, testing, and refining the Food Guide Pyramid. The goal was to have an easy-to-use graphic that would help people select a diet that promoted nutritional health and decreased the risk of disease. They designed the Pyramid to be flexible enough to be used by most healthy Americans over the age of two. However, they also recognized that people with substantially different eating habits, such as vegetarians, may need a different food guidance system.

The Pyramid includes five major food groups, each of which provides nutrients needed for good health. By making healthful choices within these food groups, like selecting low-fat and high-fiber foods, people can promote good health and reduce their risk of disease. The placement of foods within the Pyramid shows that foods of plant origin should supply most of the servings of food in the daily diet.

The Breads, Cereals, Rice, and Pasta Group forms the base of the Pyramid, with the largest number of servings recommended (six to eleven servings recommended daily). The next layer up includes the Fruit Group (two to four servings) and the Vegetable Group (three to five servings). At the third level are the Milk, Yogurt, and Cheese Group (two to three servings) and the Meat, Poultry, Fish, Dry Beans, Eggs, and Nuts Group (two to three servings). At the tip of the Pyramid are Fats, Oils, and Sweets. These foods and food ingredients should be used "sparingly" to avoid excess calories and/or fat. It is not necessary to completely avoid foods such as salad dressing, butter, margarine, candy, soft drinks, and sweet desserts, but they should be consumed infrequently.

The Pyramid includes symbols that represent the fats and added sugars found in foods. These are most concentrated at the tip of the Pyramid, but are also found in foods from the five major food groups. This reveals that some foods within the five food groups are high in fat and/or sugar. People can limit their fat and sugar intake, as suggested by the Dietary Guidelines for Americans, by selecting foods low in fat and added sugars most of the time.

Uses of the Food Guide Pyramid

Individuals can use the Pyramid educational materials to plan a diet that contains all needed nutrients and is moderate in fat and saturated fat. This is important in the United States, where the major causes of death, such as heart disease, are related to diets high in fat, especially saturated fat. Obesity is also a major health concern in the United States. Although physical activity is a critical component of weight management, food intake also plays a role in energy balance. The Food Guide Pyramid educational materials provide serving sizes and a recommended number of servings for people of different ages and activity levels. This guide can help people learn to eat reasonable amounts of food in a country where large portion sizes are the norm.

Some nutrition and health professionals disagree with the dietary recommendations of the USDA's Food Guide Pyramid. Critics of the Pyramid have expressed various concerns. Some believe that the food guide does not go far enough in emphasizing plant-food consumption, and that there is an overemphasis on foods of animal origin. Another concern is the inclusion of foods that are high in fats and/or sugars within the basic five food groups, which may lead people to maintain high fat and calorie intake. Others have indicated that the Pyramid is not appropriate for use with various ethnic and cultural groups, although this fact was recognized by the nutritionists who developed the Pyramid.

One alternative pyramid is the Traditional Healthy Mediterranean Diet Pyramid, developed by the Oldways Preservation and Exchange Trust in cooperation with Harvard School of Public Health and the World Health 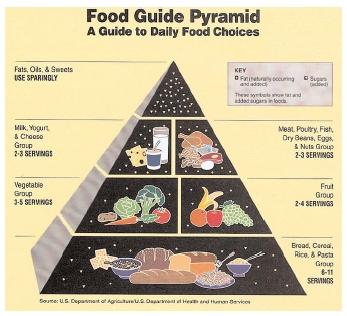 The Food Guide Pyramid, last updated in 1992, could be revised for release in 2005. Proposed changes would include more recent nutritional recommendations and may be tailored to specific ages and activity levels to help reverse the nation's trend toward obesity.
Organization. This Pyramid has an increased emphasis on foods of plant origin and limits red meat consumption to a monthly serving. It recommends daily olive oil consumption, wine "in moderation,"and daily consumption of six glasses of water. The Mediterranean Pyramid is based on a diet that has long been associated with reduced risk for heart disease, though some Americans might find it difficult adapting to such a different eating plan.

Pyramids targeting specific ethnic groups have been developed by a variety of organizations. They include Latin American, Puerto Rican, Asian, Vietnamese, soul food, and vegetarian pyramids, among others. As information emerged about the nutritional needs of older people, the need for a food guide targeted to this growing population became clear. In 1999, nutritionists at Tufts University developed a prototype of a pyramid targeted to persons seventy years of age and older. Several other pyramids for older adults have been developed at other universities since that time. To meet the needs of children, the USDA released the Food Pyramid Guide for Young Children in 1999.

The USDA Food Guide Pyramid reflects a food guide that was designed to meet the nutritional needs, and to promote long-term health, of Americans over the age of two. It supports the goals of the Dietary Guidelines for Americans, which are designed to promote healthy lifestyles and to reduce health risks. The messages of the Food Guide Pyramid are most effective when accompanied by nutrition education to help people make healthful choices from the five food groups.