Famine is the culmination of a long process, typically covering two or more crop seasons, in which increasing numbers of people lose their access to food. Although early detection seems highly possible, the origins of famine are unclear, and early response is therefore rare. Famine is distinct from generalized chronic hunger, malnutrition, or undernourishment. It is a more dramatic and exceptional event that triggers institutional responses.

Famine has been defined as the regional failure of food production or distribution systems leading to sharply increased mortality due to starvation and associated disease. Excessive mortality—deaths that would not have occurred otherwise—are a core feature of famine. Other important determinants of famine are regional issues, shifting market demand for different foods, and changes in the food aggregate supply. Famine also leads to extensive social disintegration, hoarding of food, smuggling, black-market food sales, and crime. Many people in distress sell their only assets such as their jewelry, animals, or land. Families often divide in search of work or succor—wives may even be cast adrift and children sold. Out-migration also increases as people abandon their lands, homes, and communities in desperation.

Famine is generally accompanied by a recession in the entire rural economy, affecting production and exchange, employment, and the income of farm and nonfarm households alike. Landless laborers, artisans, and traders are among those most vulnerable to famine because of shrinking demand for their labor, goods, and services. Fishermen and those who raise livestock are also vulnerable because they rely on the exchange of meat and marine products to obtain the cheaper grain calories they require. Amartya Sen, a Nobel Prize–winning economist, has argued that famine is more than just severe food shortage. His economic theory of famine is based on evidence 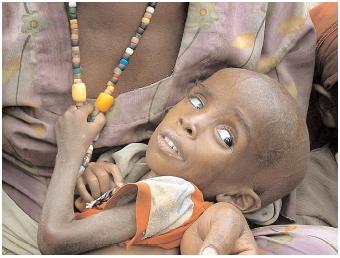 When inadequate food supply in a region causes excessive mortality, the region is in a state of famine. Economic, political, and social forces contribute to the situation.
that even with relatively small changes in the food supply, famine has been caused by other economic factors. Each person has an economic "entitlement," a range of different goods that can be acquired with an individual's resources, according to Sen. People starve when their entitlement is not enough to procure the food required to survive. How much the food is available to people depends on income distribution and the ability to provide services that others are willing to pay for. However, this does not mean that the supply of food is irrelevant in the cause of famine. A scarcity of food will usually increase the competition among people to acquire it, and thereby increase its price. For those already close to the margin of hunger and poverty, this may drive them to the point of starvation.

The twentieth century saw four major famines: the great Bengal famine in colonial India under British rule in 1943–1944, in which more than three million people died; the famine in several provinces of Ethiopia between 1972 and 1974; the drought and famine in the Sahel region of Africa between 1968 and 1973; and the famine in Bangladesh in 1974 (the same region as the 1943–1944 famine, but now under a different government). It has been argued that the only way certain parts of the world can become less prone to famine is through economic development.