The term biotechnology refers to the use of scientific techniques, including genetic engineering, to improve or modify plants, animals, and microorganisms. In its most basic forms, biotechnology has been in use for millennia. For example, Middle Easterners who domesticated and bred deer, antelope, and sheep as early as 18,000 B.C.E.; Egyptians who made wine in 4000 B.C.E.; and Louis Pasteur, who developed pasteurization in 1861, all used biotechnology. In recent years, however, food biotechnology has become synonymous with the terms genetically engineered foods and genetically modified organism (GMO).

Traditional biotechnology uses techniques such as crossbreeding, fermentation, and enzymatic treatments to produce desired changes in plants, animals, and foods. Crossbreeding plants or animals involves the selective passage of desirable genes from one generation to another. Microbial fermentation is used in making wine and other alcoholic beverages, yogurt, and many cheeses and breads. Using enzymes as food additives is another traditional form of biotechnology. For example, papain, an enzyme obtained from papaya fruit, is used to tenderize meat and clarify beverages.

The DNA contained in genes determines inherited characteristics. Modifying DNA to remove, add, or alter genetic information is called genetic modification or genetic engineering. In the early 1980s, scientists developed recombinant DNA techniques that allowed them to extract DNA from one species and insert it into another. Refinements in these techniques have allowed identification of specific genes within DNA—and the transfer of that particular gene sequence of DNA into another species. For example, the genes responsible for producing insulin in humans have been isolated and inserted into bacteria. The insulin that is then produced by these bacteria, which is identical to human insulin, is then isolated and given to people who have diabetes. Similarly, the genes that produce chymosin, an enzyme that is involved in cheese manufacturing, have also been inserted into bacteria. Now, instead of having to extract chymosin from the stomachs of cows, it is made by bacteria. This type of application of genetic engineering has not been very controversial. However, applications involving the use of plants have been more controversial.

Among the first commercial applications of genetically engineered foods was a tomato in which the gene that produces the enzyme responsible for softening was turned off. The tomato could then be allowed to ripen on the vine without getting too soft to be packed and shipped. As of 2002, over forty food crops had been modified using recombinant DNA technology, including pesticide-resistant soybeans, virus-resistant squash, frost-resistant strawberries, corn and potatoes containing a natural pesticide, and rice containing beta-carotene. Consumer negativity toward biotechnology is increasing, not only in the United States, but also in the United Kingdom, Japan, Germany, and France, despite increased consumer knowledge of biotechnology. The principle objections to biotechnology and foods produced using genetic modification are: concern about possible harm to human health (such as allergic responses to a "foreign gene"), possible negative impact to the environment, a general unease about the "unnatural" status of biotechnology, and religious concerns about modification. 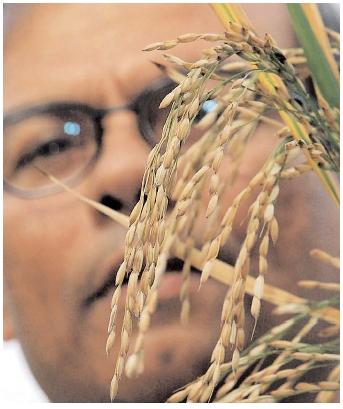 Scientists inserted daffodil genes and other genetic material into ordinary rice to make this golden rice. The result is a strain of rice that provides vitamin A, a nutrient missing from the diets of many people who depend on rice as a food staple.
produced bovine somatotropin (bST) in dairy cows. Bovine somatotropin, a naturally occurring hormone, increases milk production. This application has not been commercially successful, however, primarily because of its expense. The cloning of animals is another potential application of biotechnology. Most experts believe that animal applications of biotechnology will occur slowly because of the social and ethical concerns of consumers.

Some concerns about the use of biotechnology for food production include possible allergic reactions to the transferred protein. For example, if a gene from Brazil nuts that produces an allergen were transferred to soybeans, an individual who is allergic to Brazil nuts might now also be allergic to soybeans. As a result, companies in the United States that develop genetically engineered foods must demonstrate to the U.S. Food and Drug Administration (FDA) that they did not transfer proteins that could result in food allergies. When, in fact, a company attempted to transfer a gene from Brazil nuts to soybeans, the company's tests revealed that they had transferred a gene for an allergen, and work on the project was halted. In 2000 a brand of taco shells was discovered to contain a variety of genetically engineered corn that had been approved by the FDA for use in animal feed, but not for human consumption. Although several antibiotechnology groups used this situation as an example of potential allergenicity stemming from the use of biotechnology, in this case the protein produced by the genetically modified gene was not an allergen. This incident also demonstrated the difficulties in keeping track of a genetically modified food that looks identical to the unmodified food. Other concerns about the use of recombinant DNA technology include potential losses of biodiversity and negative impacts on other aspects of the environment.

In the United States, the FDA has ruled that foods produced though biotechnology require the same approval process as all other food, and that there is no inherent health risk in the use of biotechnology to develop plant food products. Therefore, no label is required simply to identify foods as products of biotechnology. Manufacturers bear the burden of proof for the safety of the food. To assist them with this, the FDA developed a decision-tree approach that allows food processors to anticipate safety concerns and know when to consult the FDA for guidance. The decision tree focuses on toxicants that are characteristic of each species involved; the potential for transferring food allergens from one food source to another; the concentration and bioavailability of nutrients in the food; and the safety and nutritional value of newly introduced proteins.

The World Health Organization estimates that more than 8 million lives could be saved by 2010 by combating infectious diseases and malnutrition through developments in biotechnology. A study conducted by the Joint Centre for Bioethics at the University of Toronto identified biotechnologies with the greatest potential to improve global health, including the following:

Labeling of genetically modified foods has sparked additional debate. Labels are required on food produced through biotechnology to inform consumers of any potential health or safety risk. For example, a label is required if a potential allergen is introduced into a food product. A label is also required if a food is transformed so that its nutrient content no longer resembles the original food. For example, so-called golden rice has been genetically engineered to have a higher concentration of beta-carotene than regular rice, and thus it must be included on the label. In response to consumer demands, regulators in England have instituted mandatory labeling laws for all packaged foods and menus containing genetically modified ingredients. Similar but less restrictive laws have been instituted in Japan. In Canada, the policy on labeling has remained similar to that of the United States.

Some consumer advocates maintain that not requiring a label on all genetically modified foods violates consumers' right to make informed food choices, and many producers of certain foods, such as foods containing soy protein, now include the term "non-GMO" on the label to indicate that the product does not contain genetically modified ingredients.

The application of recombinant DNA technology to foods, commonly called biotechnology, may be viewed as an extension of traditional cross-breeding and fermentation techniques. The technology enables scientists to transfer genetic material from one species to another, and may produce food crops and animals that are different than those obtained using traditional techniques. The FDA has established procedures for approval of food products manufactured using recombinant DNA technology that require food producers to demonstrate the safety of their products. The American Dietetic Association, the American Medical Association, and the World Health Organization have each adopted statements that techniques of biotechnology may have the potential to improve the food supply. These organizations and others acknowledge that long-term health and environmental impacts of the technology are not known, and they encourage continual monitoring of potential impacts.