Africa, the second largest continent in the world, is rich in geographic and cultural diversity. It is a land populated by peoples with histories dating to ancient times and cultures shaped by innumerable tribes, languages, and traditions. Because it is the birthplace of Homo sapiens and the land of origin for much of the world's population, the culture of food and eating in the different regions of Africa is important to people throughout the world.

The early history of man is the story of food in Africa. Homo sapiens evolved apart from other apes in Africa, and the adaptation of humans has been shaped by adaptations to diet. For example, some anthropologists believe that the selection pressure that led to bipedalism (walking on two legs) was an adaptation to changing environments that involved travel in search of tubers (rounded underground plant stems, such as potatoes). Africa's history includes some of humankind's earliest food production, with one of the most fertile centers located in Northern Africa, the Nile Valley. The Nile Valley historically was and continues to be a rich source of fish, animal, and plant food. In the drier African savannas, especially after the Sahara region became arid after 6000 B.C.E., nomad tribes raised cattle, goats, or sheep, which served as part of the tribes' food source. Crops that were less affected by extreme weather like cereals (such as wheat, barley, millet, and sorghum) and tubers (such as yams) slowly became popular throughout the continent and have remained important staples in the African diet today.

The African Climate and Terrain.

The historic influences on the African diet began in ancient times and continue to the present day. Great geographic differences across the African continent caused much of the variety in the African diet. In addition, many tribes and peoples migrated or traded, bringing spices and foods from each other's culture into their own. However, though each region of Africa has its distinct cuisines, African food has its basic staples.

Throughout Africa, the main meal of the day is lunch, which usually consists of a mixture of vegetables, legumes, and sometimes meat. However, though different meats are considered staples in many areas, many Africans are not able to eat meat often, due to economic constraints. Beef, goat, and sheep (mutton) are quite expensive in Africa, so these foods are reserved for special days. However, fish is abundant in coastal regions and in many lakes.

The combination of various foods is called stew, soup, or sauce, depending on the region. This mixture is then served over a porridge or mash made from a root vegetable such as cassava or a grain such as rice, corn, millet, or teff. Regional differences are reflected in variations on this basic meal, primarily in the contents of the stew. The greatest variety of ingredients occurs in coastal areas and in the fertile highlands. Flavorings and spiciness have varied principally due to local histories of trade. In the traditional African diet, meat and fish are not the focus of a meal, but are instead used to enhance the stew that accompanies the mash or porridge. Meat is rarely eaten, though it is well-liked among carnivorous (meat-eating) Africans.

Traditional ways of cooking involve steaming food in leaf wrappers (banana or corn husks), boiling, frying in oil, grilling beside a fire, roasting in a fire, or baking in ashes. Africans normally cook outdoors or in a building separate from the living quarters. African kitchens commonly have a stew pot sitting on three stones arranged around a fire. In Africa, meals are normally eaten with the hands.

The countries of North Africa that border the Mediterranean Sea are largely Muslim countries. As a result, their diet reflects Islamic traditions. The religion of Islam does not permit eating pork or any animal product that has 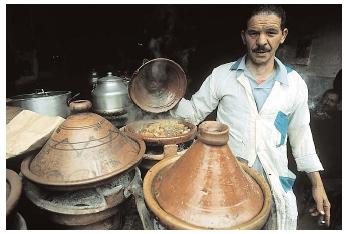 North African cuisine reflects the Islamic traditions of the region. Here, a man cooks with traditional Moroccan tajines, conical clay pots used for lamb stews and curries.
not been butchered in accordance with the traditions of the faith. Like other regions of Africa, much of the diet is based on grains. However, cooking with olive oil, onions, and garlic is more common in the countries of North Africa. Notable spices include cumin, caraway, clove, and cinnamon. Flat breads are a common staple and can accompany any meal, including breakfast, which is usually porridge prepared from millet or chickpea flour. Couscous (made from hard wheat and millet) is often the main dish at lunch, which is the primary meal. This may be accompanied by vegetable salads. Other main dishes include tajine, named for the conical clay pot in which a whole meal is prepared. Lamb is cooked in tajines as well as on kabobs (roasted on a skewer). Vegetables include okra, meloukhia (spinach-like greens), and radishes. Common fruits are oranges, lemons, pears, and mandrakes. Legumes such as broad beans (fava beans), lentils, yellow peas, and black-eyed peas are also important staples. Alcoholic drinks are forbidden by Islamic tradition. Mint tea and coffee are very popular beverages in this region.

Within West Africa, there is considerable variation in the staple food. Rice is predominant from Mauritania to Liberia and across to the Sahel, a region that stretches across the continent between the Sahara and the southern savannas. Couscous is the prevalent dish in the Sahara. Along the coast from Côte d'Ivoire (Ivory Coast) to Nigeria and Cameroon, root crops, primarily varieties of yam and cassava, are common. Cassava, imported from Brazil by the Portuguese, is boiled and then pounded into a nearly pure starch. Yam is the chief crop in West Africa and is served in a variety of dishes, including amala (pounded yam) and egwansi (melon) sauce. Millet is also used for making porridge or beer.

Many scientists believe that biotechnology is the most promising route to fighting and possibly eradicating chronic malnutrition among the 800 million people in the developing world who live in poverty. Researchers are working to develop improved versions of African staples, including a strain of sweet potato that is resistant to a virus that regularly devastates the crop, cassava that is resistant to the cassava mosaic virus, and corn that is resistant to the maize streak virus. Also under development is cotton that is less susceptible to insect infestation. However, genetically modified crops are controversial in some African countries. Zambia has banned donations of genetically modified food, and Zimbabwe has raised concerns about donations of corn from the United States that is not certified to be free of genetic modifications.

Palm oil is the base of stew in the Gambia, southern, and eastern regions. In the Sahalian area, groundnut paste (peanut butter) is the main ingredient for stew. Other stews are based on okra (a vegetable native to the rainforests of Africa), beans, sweet potato leaves, or cassava. Other vegetables are eggplant, cabbage, carrots, chilies, french beans, lettuce, okra, onions, and cherry tomatoes. All the stews in this territory tend to be heavily spiced, often with chilies.

Meat sources of protein include cattle, sheep, chicken, and goat, though beef is normally reserved for holidays and special occasions. Fish is eaten in the coastal areas. Because of the Islamic influence, pork is localized to non-Muslim areas. In these regions, "bush meat" is widely eaten, including bush rat, a large herbivorous rodent, antelope, and monkey. Giant snails are also eaten in various parts of West Africa.

Extensive trade and migrations with Arabic countries and South Asia has made East African culture unique, particularly on the coast. The main staples include potatoes, rice, matake (mashed plantains), and a maize meal that is cooked up into a thick porridge. Beans or a stew with meat, potatoes, or vegetables often accompany the porridge. Beef, goat, chicken, or sheep are the most common meats. Outside of Kenya and the horn of Africa, the stew is not as spicy, but the coastal area has spicy, coconut-based stews. This is quite unique in comparison to the central and southern parts of Africa.

Two herding tribes, the Maasai and Fulbe, have a notably different eating pattern. They do not eat very much meat, except for special occasions. Instead, they subsist on fresh and soured milk and butter as their staples. This is unusual because very few Africans consume milk or dairy products, primarily due to lactose intolerance.

The horn of Africa, which includes modern-day Somalia and Ethiopia, is characterized by its remarkably spicy food prepared with chilies and garlic. The staple grain, teff, has a considerably higher iron and nutrient content than other grain staples found in Africa. A common traditional food here is injera, a spongy flat bread that is eaten by tearing it, then using it to scoop up the meat or stew.

Outside of the temperate zones, in the southern part of the continent, a greater variety of fruits and vegetables are available. Fruits and vegetables in southern Africa include bananas, pineapples, pau-pau (papaya), mangoes, avocadoes, tomatoes, carrots, onions, potatoes, and cabbage. Nonetheless, the traditional meal in southern Africa is centered on a staple crop, usually rice or maize, served with a stew. The most common dish made from cornmeal is called mealie meal, or pap in South Africa. Also known as nshima or nsima further north, it is usually eaten with stew poured over it. The stew may include a few boiled vegetables, such as cabbage, spinach, or turnips, or on more special occasions, fish, beans, or chicken.

White South Africans (Dutch descendants called Afrikaaners), Europeans, and Asian Indians in Africa have diets similar to their countries of origin. In urban areas, however, the diet of (black) Africans is increasingly dependent on meat, much like the diet of some West African pastoral tribes, as well as on empty calories from prepackaged foods similar to those found in the West. The result is an unbalanced diet. In many parts of Africa, the traditional diets of indigenous peoples are often inadequate in essential vitamins, minerals, and protein, which can lead to a variety of diseases. Micronutrient deficiencies, particularly vitamin A, iodine, and iron deficiencies, which can result in vision impairment, goiter, and anemia, respectively, are prevalent throughout much of Africa, particularly in the arid areas where the soil is deficient either naturally or due to overuse.

A far greater threat comes from increasingly insecure food sources (a lack of consistent and affordable food staples) arising from adverse weather (drought and floods) and war. During the late 1900s, famine became increasingly frequent in Africa. In addition, a new threat to the food supply emerged due to the worsening HIV/AIDS epidemic. As adults fall ill and die, agricultural production declines. Rural communities are the hardest hit, and women are particularly at risk given their unique physiologic needs tied to their roles as mothers, as well as their vulnerability due to lower economic and social status.

With its immense population, resources, and growing population, Africa is a continent that struggles to keep its people and cultures healthy. African history, the proliferation of foods and spices across the land, and the preservation of land that can still be farmed, will continue to be important. Weather, geography, politics, culture, and religion are forces that have caused strife within Africa for centuries, and will continue to do so. A land that was once pure and fertile can only be restored through land preservation and food availability.

Carr, Marilyn, ed. (1991). Women and Food Security: The Experience of the SADCC Countries. London: IT Publications.