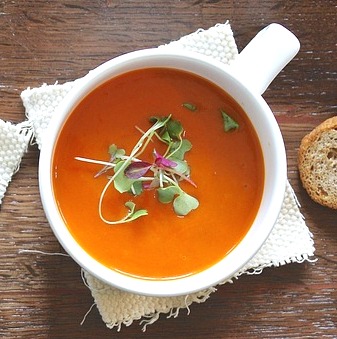 The Sacred Heart diet is a 7 day diet plan that allows a dieter to eat a specific set of foods each day and as much of a special soup as desired.

The Sacred Heart diet exists in many different forms, although all of them are fairly similar. Usually the main differences that exist are differences in the ingredients used in the soup. Some versions of this diet allow diet soda to be consumed during the diet, but most do not. Supposedly this diet was created by Sacred Heart Memorial Hospital as a diet that would allow obese patients to lose weight quickly before they were to undergo surgery (some versions of this story specify cardiac surgery). There is no evidence however, that this story is true. There are many different Sacred Heart hospitals in the United States and Canada, and many of them have issued statements saying that this diet did not come from them and is not recommended. The diet seems to mainly circulate from person to person and on the internet.

The Sacred Heart diet is a 7 day diet plan. It consists of a soup recipe and a 7 day eating guide.

During the diet, dieters may eat as much of the soup as desired and are often required to eat at least one serving each day. Some versions of the diet actually claim that this soup contains no calories, but as all food contains some calories this claim cannot be true. It is however generally a fairly low calorie soup.

There are many different versions of the Sacred Heart diet circulating. Because it is not clear where this diet originated no one recipe can be considered more correct than any other recipe. The following recipe seems to be the most common.

Some versions call for chicken broth instead of beef broth, or allow for any kind of fat-free soup mix to be used.

Directions: Chop the vegetables into small or medium pieces. Add everything to a large soup pot. Cover with water and bring to a boil. Boil for 10 minutes. Reduce the soup to a simmer and continue to cook until all the vegetables are tender. The soup may be seasoned with salt, pepper, hot sauce, bouillon, or Worcestershire sauce if desired.

The Sacred Heart diet has a very specific set of foods that may, or must, be eaten each day. There is no counting calories however. Most of the foods can be eaten in as large quantities as are desired. The soup can be eaten at any time, and as much soup as is desired

Dietary supplement— A product, such as a vitamin, mineral, herb, amino acid, or enzyme, that is intended to be consumed in addition to an individual’s diet with the expectation that it will improve health.

Mineral— An inorganic substance found in the earth that is necessary in small quantities for the body to maintain a health. Examples: zinc, copper, iron.

Obese— More than 20% over the individual’s ideal weight for their height and age or having a body mass index (BMI) of 30 or greater.

Toxin— A general term for something that harms or poisons the body.

can be eaten. Many versions of the diet claim that eating more soup will actually help the dieter lose more weight. Many also claim that this diet will flush toxins from the body and leave the dieter feeling more healthy and more energetic.

Day 1: On this day any fruit except bananas may be eaten. Some versions of the diet recommend watermelon and cantaloupe, saying they are lower in calories than other fruits. Only fruit and the soup are allowed on this day.

Day 2: On this day all vegetables are allowed, although some versions of the diet warn that dry beans, peas, and corn should be avoided. Green, leafy vegetables are recommended. Any kind of vegetables: fresh, raw, cooked, or canned are allowed. No fruits are allowed during this day. For dinner the dieter is instructed to have a baked potato with butter.

Day 3: During this day the dieter is instructed to have all of the fruits and vegetables desired. The dieter is not allowed to have a baked potato. Some versions of the diet claim that the dieter will have lost 5 or more pounds by this day if the diet is being followed exactly.

Day 5: This day is dedicated to beef and tomatoes. The dieter is instructed to eat between 10 and 20 ounces of beef and up to 1 can of tomatoes (or as many as 6 fresh tomatoes). The soup must be eaten at least once on this day.

Day 6: On this day the dieter is allowed to eat all of the beef and vegetables he or she desires. Usually leafy green vegetables are recommended. Often it is specified that no baked potato is allowed on this day. The soup must be eaten at least once on this day as well.

Day 7: On the last day of the diet the dieter is instructed to eat vegetables, unsweetened fruit juice, and brown rice. As much of these can be eaten as is desired. The soup is also required at least once on this day.

Some versions of the diet specify that boiled, broiled, or baked skinless chicken can be substituted for the beef. Broiled fish can also be substituted for beef, but only on one of the beef days. By the end of this week the diet claims that dieters will have lost between 10 and 17 pounds.

The Sacred Heart diet claims that dieters will lose between 10 and 17 pounds if they follow the diet exactly. Many versions claim that by day 3 the dieter will have lost between 5 and 7 pounds. This diet is not intended to be a new lifestyle but is intended for extreme weight loss in a short amount of time. Some versions of the diet recommend taking time off before repeating the week long diet again.

There are many benefits to losing weight if it is done at a safe, moderate pace through healthy eating and exercise. There are many obesity-related diseases and conditions such as diabetes and heart disease. The risk of the diseases can be reduced by weight loss. This is especially true for very obese people who are generally though to be at the greatest risk. This diet, however, is not generally considered appropriate for long term moderate weight loss.

Anyone thinking of beginning a new diet should consult a medical practitioner. Requirements of calories, fat, and nutrients can differ significantly from person to person, depending on gender, age, weight, and many other factors such as the presence of diseases or conditions. This diet may be of special concern because of the very limited number of foods that are allowed each day. Pregnant or breastfeeding women should be especially cautious because deficiencies of vitamins or minerals can have a significant negative impact on a baby. This diet may result in a very low intake of calories during some or all of the days on the diet because of the low calorie content of the soup. Pregnant and breastfeeding women should be especially careful to get enough calories each day because a diet with too few calories can also have a negative impact on baby.

There are some risks to any diet. The Sacred Heart diet is severely limiting in the foods that can be eaten each day. This means that it is likely that the dieter will not get enough of all vitamins and minerals required each day for good health. Any dieter thinking of beginning this diet may want to consult a healthcare provider about a supplement that would be appropriate to help reduce the risk of deficiencies. Supplements have their own risks.

The Sacred Heart diet has not been the subject of any significant scientific studies. Although the name implies that it was created by doctors or other medical professionals, this is probably not the case. The origin of the diet is unknown and many Sacred Heart Hospitals have made statements indicating that they did not create it and do not recommend it.

The United States Department of Agriculture makes recommendations for what healthy children and adults should eat each day in MyPyramid, the updated version of the food guide pyramid. For most people these are good recommendations for the number of servings from each food group required daily for good heath. Because the Sacred Heart diet is extremely limited in the foods allowed it does not

QUESTIONS TO ASK THE DOCTOR

fulfill many of these recommendations. This makes the diet especially likely to be unhealthy if repeated frequently.

MyPyramid, recommends that healthy adults eat the equivalent of 2 to 3 cups of vegetables each day. The Sacred Heart diet would probably meet this requirements for most people because the soup has many different vegetables in it, and most of the days allow vegetables.

MyPyramid also recommends that healthy adults eat the equivalent of 1 1/2 to 2 cups of fruit per day. It is unlikely that a person following the Sacred Heart diet would get this much fruit, except on day 1 when fruit is the only food allowed and day 4 where the dieter is required to eat at least 3 bananas.

Some versions of The Sacred Heart allow skim milk to be consumed as much as the dieter wishes at any time during the diet. Other versions of the diet to not allow it. Dairy products are generally considered to be part of a healthy diet. MyPyramid recommends the equivalent of 3 cups of low-fat or non-fat dairy per day for healthy adults. This requirement would probably be met during day 4, when the dieter is instructed to drink as much skim milk as possible. It is unlikely that this requirement would be met on other days of the diet, however, especially if the dieter is following a version of the diet that does not allow skim milk during days other than day 4.

MyPyramid recommends that healthy adults eat between 5 and 6 1/2 ounces of meat or beans each day. The Sacred Heart diet would not fulfill this requirement except on days 5 and 6. Day 5 requires 10 to 20 ounces of beef, which is far more than the recommended amount. Beef is also not usually a lean meat, and MyPyramid recommends mostly eating lean meats. Day 6 allows the dieter to eat as much beef as desired, which would probably also result in a consumption far in excess of the daily recommended amount.

This diet does not include any recommendation for exercise. Exercise is generally accepted to be an important part of any weight loss program. In 2007 the Centers for Disease Control recommended that healthy adults get 30 minutes or more of light to moderate exercise each day for good health.