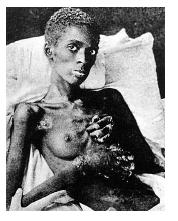 This woman's hands show scars from dermatitis, one of the primary symptoms of pellagra. The photo was taken in South Carolina, where thousands of rural poor succumbed to the illness at the start of the twentieth century.

Pellegra is a disease caused by a dietary deficiency of, or a failure to absorb, niacin (vitamin B3) or the amino acid tryptophan, a precursor of niacin. First reported in 1735 by Don Gasper Casal, a Spanish physician, pellagra means "rough skin." Primary symptoms include the "3 Ds": dementia (mental symptoms), dermatitis (scaly skin sores), and diarrhea. A pellagra epidemic emerged during the 1900s in the United States, when corn (maize) began to replace other sources of dietary protein among the rural poor. Niacin in corn is tightly bound to protein, and thus poorly absorbed. Niacin enrichment of cereal grains and diets adequate in protein and calories eventually eradicated pellagra from the United States. Seasonal epidemics still occur in parts of Southeast Asia and Africa, however.