Digestion is the breakdown of food into smaller particles or individual nutrients. It is accomplished through six basic processes, with the help of several body fluids—particularly digestive juices that are made up of compounds such as saliva, mucus, enzymes, hydrochloric acid, bicarbonate, and bile.

The six processes of digestion involve: (1) the movement of food and liquids; (2) the lubrication of food with bodily secretions; (3) the mechanical breakdown of carbohydrates, fats, and proteins; (4) the reabsorption of nutrients—especially water; (5) the production of nutrients such as vitamin K and biotin by friendly bacteria; and (6) the excretion of waste products. Comprehension of the tasks or processes needed to break down food are essential to an understanding of how and when food really begins to function within the body. For example, not understanding that carbohydrates break down into glucose could lead one to believe that the best source of glucose is in liquid form such as a soft drink. This could cause one to miss out on the nutrients (and great taste) in fruits, vegetables, and grains. Likewise, not understanding the digestion process could lead a person to believe in the myth of "food combining," or perhaps to think it is normal to be hungry all the time. But, in fact, the digestive processes normal to human physiology can simultaneously handle carbohydrates, fats, and proteins—and allow people to go several hours between meals, especially if meals are balanced in fiber and the individual nutrients needed.

Digestion begins in the mouth with the action of salivary amylase. The food material then progresses past the esophagus and into the stomach. A bolus (soft mass) of chewed food moves by muscular wave actions, called peristalsis, from the mouth to the pharynx, and then past the epiglottis that covers the larynx. The epiglottis closes off the air passage so that one doesn't choke. The cardiac sphincter prevents reflux of stomach contents into the esophagus.

From the Stomach to the Small Intestine

Most digestion occurs in the upper portion of the small intestine, called the duodenum. Below the duodenum is the jejunum, and then there is the last segment, called the ileum. About 5 percent of undigested food products are broken down in the ileum. This is why some people can have a small part of their intestine removed and still seem to digest most foods with little problem.

Digestion of food that enters the small intestine is usually complete after three to ten hours. Once digestion is essentially finished, waste products leave the ileum with the help of fiber, and these solids then enter the large intestine (the colon). In the colon, water is reabsorbed; some nutrients are produced by friendly bacteria (vitamin K, biotin, vitamin B12); fibers are digested to various acids and gases; and minerals, such as potassium and sodium, are reabsorbed (when needed). Any fiber that is not broken down—and small amounts of other undigested products—are excreted in the feces.

During digestion in the stomach, large proteins break down into smaller protein forms, and harmful bacteria can become inactive. Hydrochloric acid is especially important for this because it lowers the pH of the stomach contents below 2. Along with the uncoiling of protein in the stomach, a little carbohydrate and lipid are broken down with the help of enzymes (called amylase and lipase, respectively).

In the stomach, carbohydrates in foods turn to starch, but it is not until the chyme reaches the small intestine and becomes more neutralized that starch turns to simple sugars that are then absorbed into the portal vein, which transports them to the liver. Also in the small intestine, lipids (mostly in the form of triglycerides) are emulsified and form monoglycerides and free fatty acids that can then go through the lymph system to the heart and bloodstream.

As previously mentioned, the mouth, stomach, small intestine, and colon are the major organs of digestion. However, the liver, gallbladder, and pancreas are also important to the process. The liver detoxifies foreign compounds, such as natural toxicants in foods and drugs. The liver also makes bile, an emulsifier, which enters the small intestine and prepares fats and oils for digestion. This bile is stored in the gallbladder prior to delivery to the small intestine. A hormone called cholecystokinin helps control the release of bile.

The pancreas makes pancreatic juice consisting of enzymes (amylases, lipases, and proteases) and bicarbonate, which helps neutralize acidic secretions produced during digestion. The pancreas delivers the pancreatic juice to the small intestine, in response to a signal of food in the intestine and the release of the hormone secretin. The pancreas also has another function, the secretion of the hormones insulin and glucagon, which helps maintain a steady state of blood sugar in the body (insulin decreases blood glucose concentration, while glucagon increases it).

Food moves from the mouth to the epiglottis, bypassing the trachea, into the esophagus, past the cardiac sphincter into the stomach, past the pyloric valve into the small intestine (duodenum, jejunum, ileum), and then 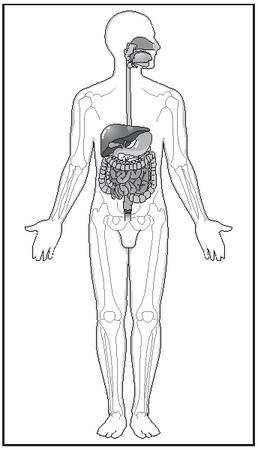 The tract running from the esophagus to the large intestine is called the alimentary canal, and it is where most digestion occurs. As food is pushed through the system, it encounters numerous specialized processes that act on it in different ways, extracting nutrients and rejecting waste.
past the ileocecal valve into the colon. Waste then leaves the colon through the rectum and anus. When chyme reaches the small intestine, the pancreas and liver contribute to the digestion by providing products such as bicarbonate, enzymes, and bile.

Absorption is the movement of molecules across the gastrointestinal (GI) tract into the circulatory system. Most of the end-products of digestion, along with vitamins, minerals, and water, are absorbed in the small intestinal lumen by four mechanisms for absorption: (1) active transport, (2) passive diffusion, (3) endocytosis, and (4) facilitative diffusion. Active transport requires energy.

Nutrient absorption is efficient because the GI tract is folded with several surfaces for absorption and these surfaces are lined with villi (hairlike projections) and microvilli cells. As one nutrition textbook puts it, each person has a surface area "equivalent to the surface of a tennis court" packed into his or her gut (Insel et al., p. 81). Efficient absorption can be compromised due to lactose intolerance. Lactose intolerance is not uncommon in the world, affecting about 25 percent of the U.S. population and 75 percent of the worldwide population. It is usually due to the lack or absence of the enzyme lactase, which breaks down milk sugar.

Protein, carbohydrate, lipid, and most vitamin absorption occur in the small intestine. Once proteins are broken down by proteases they are absorbed as dipeptides, tripeptides, and individual amino acids. Carbohydrates, including both sugar and starch molecules, are broken down by enzymes in the intestine to disaccharides called sucrose, lactose, and maltose, and then finally into the end-products known as glucose, fructose, and galactose, which are absorbed mostly by active transport. Lipase, an enzyme in the pancreas and the small intestine, and bile from the liver, break down lipids into fatty acids and monglycerides; these end-products then are absorbed through villi cells as triglycerides.

Hormones and the nervous system coordinate digestion and absorption. The presence of food, or the thought or smell of food, can cause a positive response from these systems. Factors that can inhibit digestion include stress, cold foods, and bacteria.