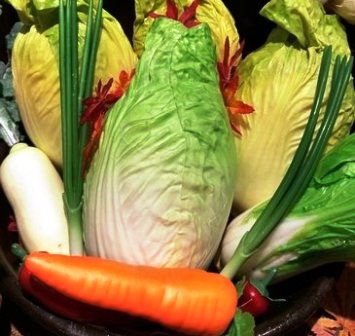 The cabbage soup diet has a number of other names:

The cabbage soup diet may be the oldest fad diet still in use; it seems to resurface with a new name every 10 to 15 years. It has been described by some historians of popular culture as a good example of an urban legend—a type of modern folklore passed from person to person via word of mouth, photocopies, or e-mail. Urban legends are often stories or anecdotes, but some can be called “widely accepted misinformation.”

No one seems to know when the cabbage soup diet was first formulated or the identity of its originator. According to the American Dietetic Association”s timeline of fad diets, the cabbage soup diet originated around 1950, but it may date back even earlier. There is a recipe for “Doughboy Cabbage Soup” dating back to World War I (1914–1918), when American soldiers fighting in France had few other vegetables available and eating cabbage offered protection against scurvy, a deficiency disease caused by inadequate vitamin C in the diet. The name “Military Cabbage Soup Diet” is likely derived from the World War I soup recipe, although that early recipe lacked the tomatoes, bouillon cubes, and other seasonings included in recent versions of the diet.

After the 1950s, the cabbage soup diet was revived in the early 1980s not only as the Dolly Parton Diet but also as the Trans World Airlines (TWA) Stewardess Diet and the Model”s Diet. It acquired these names because of the belief that celebrities, models, and flight attendants had to meet rigorous periodic weight check-ins in order to keep their jobs. The cabbage soup diet was passed around from person to person in the form of photocopies during this period. It often claimed that the dieter would lose 10-17 lb during the first week either because cabbage supposedly has no calories at all or because it contains a “miracle fatburning” compound.

The cabbage soup diet reappeared in the mid-1990s, when fax machines and the Internet made it easy for people to transmit copies of the diet to friends and workplace colleagues. The diet was also published in magazines such as Cosmopolitan and Gentlemen”s Quarterly (now GQ) in 1995. The diet was attributed to health associations as well as the cardiology departments of several hospitals and medical centers in this period. These institutions supposedly gave the diet to overweight patients preparing for heart surgery to help them to lose weight quickly before their operations. Thus, the diet acquired such names as the Sacred Heart diet or the Spokane diet (from the names of hospitals in Brussels, Belgium, Montreal, Quebec, and

Flatulence—The medical term for intestinal gas expelled through the anus.

Scurvy—A deficiency disease caused by a lack of dietary vitamin C, characterized by spongy gums, eventual loss of teeth, and bleeding into the skin and mucous membranes.

Urban legend—A story, anecdote, or piece of advice based on hearsay and circulated by person-to-person transmission.

Most versions of the cabbage soup diet begin with a recipe for the soup. One change that has evolved since the diet first appeared in the 1950s is the cooking instructions; the earliest versions of the diet recommended cooking the soup for an hour, which would destroy most of the nutrients in the cabbage and other ingredients. Recent soup recipes recommend simmering the soup no more than 10 to 15 minutes after being brought to a boil.

Preparation of the soup is simple. Vegetables are cut into small pieces and covered with water (and V-8, if desired) in a large pot. The mixture is brought to a boil and simmered for 10 to 15 minutes or until vegetables are tender. Parsley, Worcestershire sauce, and/ or black pepper may be added to taste.

Considered the original cabbage soup recipe on some websites, this version is prepared by cutting vegetables into small pieces and covering them with chicken broth and canned tomatoes in a large pot. The mixture is cooked over low heat for 15 minutes.

Preparation involves combining vegetables in a large pot with water, soup mix, bouillon cubes, and canned tomatoes. Additional water may be added if needed to fully cover the vegetables. The mixture is cooked over low heat about 15 minutes or until the vegetables are soft.

Dieters are supposed to follow specific menus for each day of the diet, with the understanding that an unlimited amount of cabbage soup can be eaten each day.

Some Internet versions of the cabbage soup diet include additional instructions for the dieter:

Diet pills available on the Internet supposedly represent the cabbage soup used in the diet in dehydrated form. Discovery of the pills is credited to a woman who works in a food processing plant that makes meals ready to eat (MREs) for the military. She is said to have tried dehydrating cabbage soup in the ovens for preparing MREs and ended up with a powder that tasted like the original soup when warm water was added. A local manufacturer of homeopathic remedies supposedly began packaging the powder in pill form. The cabbage soup diet pills claim to speed up weight loss, melt fat, curb appetite, cure depression, detoxify the digestive tract, boost the immune system, and protect against cancer.

The cabbage soup diet is intended only for short-term weight loss. It is usually recommended as a quick way to lose weight after holiday-related overeating or to fit into an outfit for a special occasion. A few Internet versions claim the cabbage soup diet can be used for weight maintenance or for long-term nutrition. A book published on the diet in 1997 and revised in 2004 does contain an appropriate maintenance diet intended for use after the seven-day soup diet.

The cabbage soup diet does work for some people as a short-term way to lose weight rapidly. Some people like the fact that the diet offers a break from junk food or fast food, and does not require any unusual or expensive ingredients, complex recipes, or appetite suppressants. Also, the soup can be stored in the refrigerator for convenience or frozen for later use.

The cabbage soup diet is safe for most adults in good health who follow it no longer than seven days. The diet should not be used by individuals with type 2 diabetes, eating disorders, or other disorders requiring special diets without consulting a doctor or registered dietitian. Dieters who do use this diet should be aware that most of the weight they lose during the week is water weight, and is easily regained when return to their previous eating habits.

Due to the restrictive and repetitive nature of this diet, it is difficult to sustain for any length of time. Such diets are not useful for long-term weight loss and weight maintenance. Frequent use could lead to yo-yo dieting, which has been shown to be detrimental to health.

The cabbage soup diet does not include an adequate balance of nutrients and may be too low in calories to make it suitable for long-term use. Claims that the diet can be used indefinitely or repeated within three days of completing the first cycle should be ignored as they are not safe.

The diet does not require spending large amounts of time cooking or assembling ingredients, but it may be difficult to follow when cooking for a family.

Side effects from the diet may include dizziness, light-headedness, and flatulences (intestinal gas). The latter may be a social risk due to embarrassment related to passing gas in public. Common versions of the soup recipe are high in salt. Dieters who must restrict their sodium intake should discuss variations with their physician.

The cabbage soup diet has not been the subject of any mainstream clinical trials as of 2007, most likely because it is a classic fad diet. Cabbage by itself, however, has been studied by nutritionists and food chemists for some years, and is considered a good food to include in

any healthful and well-balanced diet. The cabbage used as food by modern humans, Brassica oleracea, was developed from a variety of wild mustard native to southern Italy and France several centuries before the Christian era. It was eaten both raw and cooked by the ancient Greeks and Romans. Ancient physicians used a paste made from raw cabbage to reduce inflammation surrounding a wound. Cabbage is a cool-weather crop that can be harvested in 50 to 80 days, which helps explain why it is a dietary staple in northern and central Europe as well as in Korea and other parts of Asia.

According to the U.S. Department of Agriculture (USDA) database, raw cabbage contains 20 calories per 100g (about 3-1/2 oz), 5.6g of carbohydrates, and 32mg of vitamin C—about 53% of an adult”s daily requirement. The carbohydrate content includes 3.2g of sugars per 100g, which are released during cooking, and 2.3g of dietary fiber Thus, the cabbage soup diet does make use of some scientific findings about the nutritional value and low calorie content of cabbage: the short period of cooking recommended by the soup recipe helps remove the bitter taste of raw cabbage without destroying its dietary fiber or vitamins.

Evaluations of the cabbage soup diet

The American Heart Association (AHA) and the hospitals whose names have been associated with the cabbage soup diet have issued formal disclaimers warning the public that they do not endorse this diet. The Hopital du Sacré-Coeur de Montréal states in its 2004 press release that the diet is contrary to healthy feeding patterns and even presents potential dangers to good health. The Sacred Heart Medical Center (SHMC) in Spokane requests that people do not affiliate the diet with their hospital as they do not consider it a safe or healthy method of weight loss. A SHMC disclaimer states, “This diet did not originate at SHMC and it is not endorsed by the dietitians or the staff of our cardiac rehabilitation program. One of our major concerns about this diet plan is it emphasizes the consumption of fruits and vegetables while excluding the consumption of meat or fish, cereal grains and milk products on most days. Any diet that focuses on only certain food groups will be low or deficient in essential nutrients and, therefore, lead to poor nutritional status long-term. Our experience with any low calorie diets like this one is that they do not lead to permanent weight loss. Once individuals start eating in a more normal pattern, the weight is regained. A very important factor in obtaining a healthy weight is to evaluate your physical activity and other lifestyle concerns. This is most appropriately done by consulting with a registered dietitian.”

Scientific evidence is not yet available to support claims that cabbage has unique detoxifying, fat-burning, immunoprotective, antidepressant, or anticancer properties. Claims regarding the possibility of losing 17 pounds by the end of one week on this diet are exaggerated. In addition, there is no indication that the government of Australia (or any other government) has ever sponsored clinical trials of cabbage soup, whether in pill form or fully constituted.

Scales, Mary Josephine. Diets in a Nutshell: A Definitive Guide on Diets from A to Z. Clifton, VA: Apex Publishers, 2005.