Additives are defined by the United States Food and Drug Administration (FDA) as "any substance, the intended use of which results or may reasonably be expected to result, directly or indirectly, in its becoming a component or otherwise affecting the characteristics of any food." In other words, an additive is any substance that is added to food. Direct additives are those that are intentionally added to foods for a specific purpose. Indirect additives are those to which the food is exposed during processing, packaging, or storing. Preservatives are additives that inhibit the growth of bacteria, yeasts, and molds in foods.

Additives and preservatives have been used in foods for centuries. When meats are smoked to preserve them, compounds such as butylated hydroxyanisole (BHA) and butyl gallate are formed and provide both antioxidant and bacteriostatic effects. Salt has also been used as a preservative for centuries. Salt lowers the water activity of meats and other foods and inhibits bacterial growth. Excess water in foods can enhance the growth of bacteria, yeast, and fungi. Pickling, which involves the addition of acids such as vinegar, lowers the pH of foods to levels that retard bacterial growth. Some herbs and spices, such as curry, cinnamon, and chili pepper, also contain antioxidants and may provide bactericidal effects.

Uses of Additives and Preservatives in Foods

Based on the 1958 Food Additives Amendment to the Federal Food, Drug, and Cosmetic (FD&C) Act of 1938, the FDA must approve the use of all additives. The manufacturer bears the responsibility of proving that the additive is safe for its intended use. The Food Additives Amendment excluded additives and preservatives deemed safe for consumption prior to 1958, such as salt, sugar, spices, vitamins, vinegar, and monosodium glutamate. These substances are considered "generally recognized as safe" (GRAS) and may be used in any food, though the FDA may remove additives from the GRAS list if safety concerns arise. The 1960 Color Additives Amendment to the FD&C Act required the FDA to approve synthetic coloring agents used in 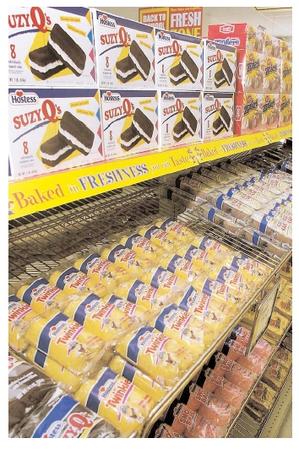 The legendary longevity of some packaged foods such as Twinkies, is attributable in part to food additives that stabilize ingredients and prevent spoilage. Additives also enhance the nutrition, flavor, and consistency of foods.
foods, drugs, cosmetics, and certain medical devices. The Delaney Clause, which was included in both the Food Additives Amendment and Color Additives Amendment, prohibited approval of any additive that had been found to cause cancer in humans or animals. However, in 1996 the Delaney Clause was modified, and the commissioner of the FDA was charged with assessing the risk from consumption of additives that may cause cancer and making a determination as to the use of that additive.

The FDA continually monitors the safety of all food additives as new scientific evidence becomes available. For example, use of erythrosine (FD&C Red No. 3) in cosmetics and externally applied drugs was banned in 1990 after it was implicated in the development of thyroid tumors in male rats. However, the cancer risk associated with FD&C Red No. 3 is about 1 in 100,000 over a seventy-year lifetime, and its use in some foods, such as candies and maraschino cherries, is still allowed. Tartrazine (FD&C Yellow No. 5) has been found to cause dermatological reactions ranging from itching to hives in a small population subgroup. Given the mild nature of the reaction, however, it still may be used in foods.

Nitrites are also a controversial additive. When used in combination with salt, nitrites serve as antimicrobials and add flavor and color to meats. However, nitrite salts can react with certain amines in food to produce nitrosamines, many of which are known carcinogens. Food manufacturers must show that nitrosamines will not form in harmful amounts, or will be prevented from forming, in their products. The flavoring enhancer MSG is another controversial food additive. MSG is made commercially from a natural fermentation process using starch and sugar. Despite anecdotal reports of MSG triggering headaches or exacerbating asthma, the Joint Expert Committee on Food Additives of the United Nations Food and Agriculture Organization, the World Health Organization, the European Community's Scientific Committee for Food, the American Medical Association, and the National Academy of Sciences have all affirmed the safety of MSG at normal consumption levels.

The Discovery of Canning

During the late eighteenth century the French army was suffering from scurvy, malnourishment, and outright starvation, and the French government offered a prize of 12,000 francs to anyone who could discover a way to preserve food for the troops. Nicholas Appert, a candymaker, brewer, and baker, reasoned that he should be able to preserve food in bottles, like wine. After fourteen years of experimentation, he finally discovered that if he put food in glass jars reinforced with wire, sealed them with wax, and applied heat, the food didn't spoil. Appert was presented with the 12,000-franc prize by Napoleon himself. However, the secret of preserved food soon leaked to the English, who proceeded to invent the can, and the armies that faced off at Waterloo were both fortified by preserved rations.

In Europe, food additives and preservatives are evaluated by the European Commission's Scientific Committee on Food. Regulations in European Union countries are similar to those in the United States. The Food and Agricultural Organization (FAO) of the United Nations and the World Health Organization (WHO) Expert Committee on Food Additives work together to evaluate the safety of food additives, as well as contaminants, naturally occurring toxicants, and residues of veterinary drugs in foods. Acceptable Daily Intakes (ADIs) are established on the basis of toxicology and other information.