Sarah Dussault, a name you may recognize as Senior Video Producer here at Diet.com, brings the Diet Diva character to life with her sometimes biting, sometimes funny, always interesting takes on life and our passion for celebrities and their weight loss methods. The Diet Diva never shies away from a fight, but is always fair with her commentary.

After the Madrid Mayhem with the banning of models under a BMI of 18, Fashion designer Jean Paul Gaultier made his own statement by putting a size 20 model on the runway. Wearing a risky black corset, the plus-sized model stole the attention away from all the other waif-like catwalk girls. Gaultier’s 30th anniversary show during fashion week in Paris proved big can be beautiful and can also wear couture.

Known as one of the Fashion Capitals of the world, Paris dismissed the idea of placing a weight requirement on its models. The famous designers proclaimed their garments were made for the extremely slender for no reason other than they look better on the runway. Gaultier proved otherwise by placing a plus-size model among the rest of his walking skeletons.

If most of consumers cannot fit into high end retail, why are the designers still insisting on showing how good their clothes fit on child-like bodies? I hate skinny jeans, not because I think they are ugly (I don’t) but because I would never look good in them. I look at clothes on the runway and say, “That looks cute.” But in my head I’m thinking, “I could never wear that, next…”

Gaultier is well respected and has been around the fashion industry for a long time. Let’s hope the other designers follow his lead and begin putting more models on the runway with fuller figures. Let’s hope designers begin to learn how to make clothes meant for average sized women too. Little steps in the right direction will produce big changes. What do you think about Gaultier’s bold statement? 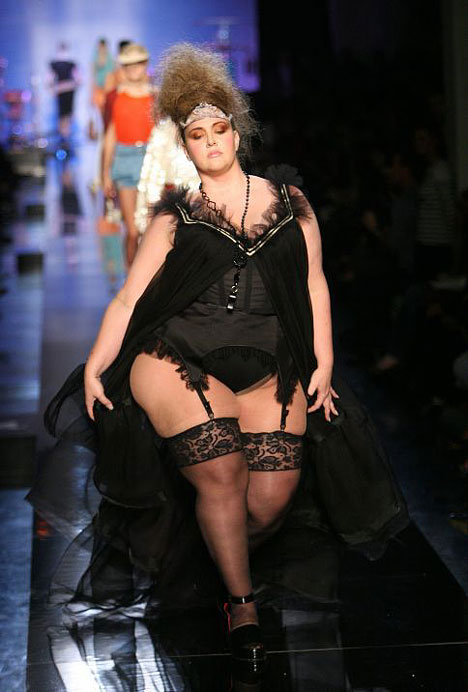 @ 5:25pm ET on October 5, 2006
I think she is a great plus-size model! What makes her stand out is her matter-of-fact self-confidence. That is great.

@ 3:43pm ET on October 10, 2006
Banning models with a BMI lower than 18 is good, but models at this size is wrong. Isn't there an in-between? Too skinny and too fat are both wrong. I do however think that posting this on the refrigerator is a good idea!

@ 6:44pm ET on October 10, 2006
I don't think that this shows a healthy body any more than the super-skinny girls you usually see. How about a range of body types instead? Like a petite size 12 with great hips, or a strong, athletic size 10? Maybe a stunning, graceful 8, or a knockout 14?

Anyways, Gaultier isn't doing this to raise acceptance or change people's views. He's doing it for the attention from the media. Guess what? It worked. But do you think you'll be seeing more size-20 women on the catwalk at Fashion Week? Not likely.

@ 9:46pm ET on October 11, 2006
Agreed! I wonder if this is more a sarcastic response by JPG than anything else. If he starts populating the runway with real & true body shapes and sizes I may come to believe it was something more than a stunt.

@ 9:51am ET on October 13, 2006
I agree that models are too skinny but putting that outfit on that large of a woman was not pretty at all. She is just as sick looking as the skeleton models. I think he was trying to make a point because I don't think that will sell his clothing.

@ 1:14pm ET on November 22, 2006
I agree with HBlunda, Bird77 and Ljanine this size 20 model is no healthier than the size 2 if only they had used several models with average weights.

@ 9:36am ET on November 25, 2006
I think it is a matter of balanace. Why do they go to both extremes... overly skinny and overy large are not setting good examples. They are trying to make a point, however they're making no statement at all. What they should do is have average sized women gracing the catwalk.

@ 8:51pm ET on January 31, 2007
Too fat is wrong too. Although I love her self confidence, it's sending a message that fat is ok but it's not!! Why else are we all trying to become healthy??
Being fat is just as dangerous and unhealthy as being too thin.

@ 2:41pm ET on February 21, 2007
It seems more a sarcastic slap in the face than anything else. The garment he put her in does nothing to flatter a large frame...it is just a shock factor to get attention. I agree with Bird77 it would have had more meaning if it was meant to show a 'normal' person wearing haute couture and not just a big girl in her undies.

@ 3:35pm ET on May 23, 2007
I am glad that this has happened....as a person struggling in the midst of eating disorders...this is a very good sign for the public....I do not wish anyone to have to go through what i have gone through....it is living hell...and those models were definately sending the worng image out for all women....and guys alike....

@ 2:05pm ET on July 18, 2007
Yeah I agree. I have to wonder if this was just a joke to JPG, at least that was my first thought when I saw the picture. I also agree that there has to be an in between. I'm glad that she looks confident in what little clothing she is wearing but I would rather see a knockout 14 on the runway, not a knock-you-out 20.